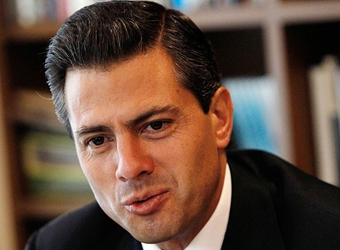 “Where there is a Mexican migrant at risk that requires our support, your country should be there,” Peña Nieto said in a brief address to his nation, which he said was a response to Trump’s actions earlier in the day.

“Our communities are not alone,” Peña Nieto said. “The Mexican Government will provide them with the legal advice, which guarantees the protection they require.”

Specifically, he said, “the 50 Mexican consulates in the United States will become authentic advocates for the rights of migrants.” He didn’t provide details on what he said he wanted them to do.

Peña Nieto is scheduled to meet with Trump next Tuesday to discuss trade and immigration. But after Trump signed the two orders, one to begin steps to fund Trump’s promised wall along the US, Mexican border and the other to significantly boost the U.S. Border Patrol, Peña Nieto said he was consulting with Mexican officials in Washington to decide on “the next steps.”

While he stopped short of canceling the meeting, he insisted: “Mexico offers and demands respect as the fully sovereign nation we are.”

Peña Nieto said he “regrets and rejects” Trump’s orders Wednesday because “Mexico does not believe in walls.”

“I have said it over and over again: Mexico will not pay for any wall,” he stressed.

The showdown over immigration isn’t the only tense topic on the agenda for next week’s meeting, assuming it goes forward.

Trade would also be a key issue of discussion with Trump, who promised during his campaign to renegotiate the terms of the North American Free Trade Agreement.

Peña Nieto’s economy minister said Tuesday that Mexico could also pull out of the treaty if it’s renegotiated on terms that leave Mexico with “something that is less than what we already have.”

As if to emphasise the point, Peña Nieto noted Wednesday night that Trump’s orders were issued “at a time when our country is initiating talks to negotiate the new rules of cooperation” on trade. “This negotiation is very important for the strength, certainty and future of our economy and our society,” he said.