Mohamed Taymour, father of investment banking in Egypt dies at 75 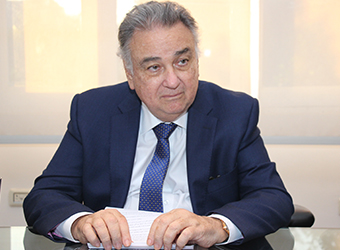 Egypt’s close-knit finance community has mourned Wednesday the death of one of its founding fathers after Mohamed Taymour passed away at the age of 75. The nation’s finance industry has had two golden ages. The first was a 50 or so year run that began with the founding of the National Bank of Egypt in 1898 by the Sir Ernest Cassel, Cairo’s Suares family and Constantine Salvagos of Alexandria. That era came to an ignoble end with the Free Officers’ Revolution in 1952.

The second golden age of Egyptian finance began on a hot August day in 1980. As Taymour told us several years back, that’s when “with two friends I decided that Egypt was entering an era in which private sector investors and institutions would need professional advice in raising funds and negotiating with the government-dominated banking sector. With only a secretary and telex machine, and sharing a small apartment with an architectural office, we launched the predecessor of EFG Hermes under the name of Technical Financial Services (TFS). By 1984, the firm had grown to a total of six professionals and we officially incorporated it as the Egyptian Financial Group (EFG). The rest, as they say, is history.”

Two pivot points led to the creation of Egypt’s modern financial system. The first was the founding in 1975 of Chase National Bank, the institution that has become CIB. The second wasn’t the passage of the 1992 capital market law, but when Taymour gave the go-ahead to Ahmed Heikal’s plan to acquire a brokerage house and start up an asset management business. “I still remember our sales strategy as we started seriously building out the distribution business,” Heikal would later recall. “Nobody outside Egypt really knew who we were, so we would all come into the office on Fridays to cold call [western] asset managers. We chose the houses we would call by whether their listings were bolded in the Yellow Pages. That’s how we built the international side of the business — one cold call at a time.”

Taymour understood that our industry is fundamentally about people. Looking back at EFG Hermes on the twenty-fifth anniversary of its founding, he singled out the people (including Ahmed and Hassan Heikal, Alaa Saba and Ali El-Tahri, among others), the team spirit and the code of ethics that he said had made the firm what it became. Even his choice of the lawyer who incorporated his company back in 1984 proved prescient — she was a young Mona Zulficar, who today is EFG Hermes’ chairperson and a leading corporate lawyer.

Taymour built an institution. In tipping his hat to the people who helped build EFG, Taymour was the first in our industry who acknowledged that good people came — and stayed to build an institution — not on the promise of good salaries, but on the prospect of being able to buy a stake in the business. In giving up equity to grow the firm (and by later bringing in Citi as a 20% partner), Taymour set EFG Hermes on course to become a truly independent multinational — and one that has never forgotten its Egyptian roots.

Taymour was a quiet patriot, recalling that not long after the merger of EFG with Hermes Financial Services, he inaugurated a lecture series designed to remind his staff of where they came from. Zahi Hawass, then an obscure archaeologist, was the first speaker in the series. “The rationale was simple: Yes, we were globally experienced. Yes, we were financial professionals. But we were also Egyptian. Among the many who followed Dr. Hawass were the great colloquial poet Ahmed Fouad Negm and the famous writer and thinker Mahmoud El-Saadani,” he said in 2011.

Taymour’s legacy isn’t just the creation of Egypt’s asset management industry in the early 1990s or EFG Hermes’ leadership of the privatization and IPO booms later in that decade, but the brand-name Egyptian multinationals that have thrived in no small measure because they had access to the capital market he helped create, from the Orascoms and GB Auto to EFG Hermes itself.

Dr. Mohamed Taymour was a past chairman of the Egyptian Capital Market Association, a leading industry group. Taymour stepped down as chairman of EFG Hermes in 2005 at the age of 62 and went on to become chairman of Pharos Holding. He was an active member of the board of the Tourism Fund and of the Egyptian Center for Economic Studies and served on the boards of Audi Bank and the Arab Investment Group. An industrial engineering graduate from Cairo University, he held a PhD in systems analysis from Dartmouth College. He is survived by his sons Elwy (chief executive officer of Pharos) and Sherif.