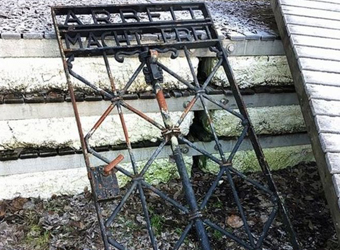 German police say they believe an iron gate stolen in 2014 from a former Nazi concentration camp at Dachau has been found in Norway.

Bavaria’s police say their colleagues in Bergen found a gate with the Nazi slogan “Arbeit Macht Frei” (“Work sets you free”) after an anonymous tip-off.

After receiving photos from Norway, the police say it is “highly likely” to be the infamous gate.

More than 40,000 people were murdered by the Nazis in Dachau, near Munich.

Built in 1933, the camp at Dachau was the first Nazi concentration camp and it initially housed political prisoners.

Thousands of Jews, foreigners and other groups persecuted by the Nazis were later held at Dachau. Many inmates were shot or gassed, with thousands others dying through disease or overwork.

The camp was liberated by US troops in 1945.

It is now a memorial, attracting hundreds of thousand of visitors from around the world.