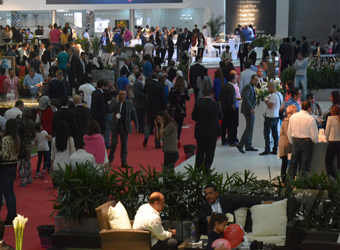 Next Move Egypt, powered by Cityscape, will take place from December 14th until the 16th at the Cairo International Convention Centre.

In the lead up to the event, Tom Rhodes, Exhibition Director of Next Move Egypt, discusses how the show will stimulate real estate investment across the country and open opportunities for middle-income earners in the country’s property sector.

What was the reason behind launching Next Move?

The demand for middle-income housing in Egypt remains a central issue, therefore we have organised a consumer exhibition like Next Move to connect the country’s residential developers with potential middle-income homebuyers.

It’s important to note that the effects of the devaluation and subsequent float earlier this year have been varied, but experts have revealed that it has caused a boom in the housing market as more people lean towards residential real estate as one of the few remaining stable investments.

Due to Greater Cairo’s burgeoning population of more than 20 million – roughly a quarter of Egypt’s total population – we have witnessed that demand for housing in the capital area continues to outstrip supply. There are many Egyptians who need quality housing from developers in the country and Next Move Egypt will look at filling this gap.

In addition, with 50% of Cairo’s residents between the ages of 15 and 40, marriages are a large contributor to demand as many seek homes of their own. According to Oxford Business Group, there are an estimated 900,000 weddings per year in the country and thus a major driver of demand in the mid-housing market. Coupled with this, the rise in consumer confidence and attractive payment plans at the show all point to Next Move Egypt being ideally positioned to facilitate real estate investment for middle-income earners.

What can visitors expect from the inaugural edition of the show?

Visitors to the show this year will be able to avail a range of flexible and attractive payment plans on apartment units, townhouses and community villas.

We expect significant interest from potential homebuyers, who will benefit from exclusive discounts and payment plans which will only be available during the show. Our exhibitors will be on hand to assist with advice on the country’s real estate industry.

There will be several projects on show, many of which will include flexible payment plans.

3Aqarweb will reveal its 6th October projects; Maadi (Zahraa Maadi), Haddabah Wosta (Oriana), and El-Sherouk. Each of the projects will offer payment plans between 4 – 6 years with 0% interest.

Heliopolis Developers Group (HDG) has several residential projects under its belt for Next Move including; Korba Heights in Nasr City, and Gold Yard in Sheraton Heliopolis.

Integrated Solution will showcase two projects in New Cairo; Jiran, and B81 and will offer visitors flexible payments with instalments made over 8-years.

While exhibitor, Al Safwa Real Estate will unveil its latest project, Capital Heights 1, a 50-acre project in the heart of the New Administrative Capital. The developer will also offer a zero percent down payment with a 7-year instalment plan.

In your opinion, what are buyers in this market looking for and how will Next Move cater to them?

Buyers are traditionally looking for apartment units, townhouses or villas in areas that are close to places of work schools, retail and hospitals. Many homebuyers are now also looking at the capital’s most promising areas as Cairo expands its metropolis.

The latest in the growing list of suburban cities is the New Administrative Capital and New Cairo. These are just some of the areas which will headline Next Move and will be offered with flexible and affordable down payments and payment plans from developers.

We believe that visitors will also look for a solid investment as they think about their long-term real estate plans. Experts tell us that higher levels of capital appreciation can be found in areas outside of the city centre and potential homebuyers will be mindful of this, considering that New Administrative Capital has an average square metre rate that is slightly lower than the more established newer cities.

What financial support is there in the current market and how will we see this support at Next Move?

A benefit of the current market is that developers have been offering more flexible payment terms on apartments, villas and townhouses along with affordable down payments and this will be realised at Next Move. Property consultant JLL tells us that: “Flexibility is the new competitive edge with developers now adjusting their product base and operation plans. Among the strategies being used to attract sales in an increasingly competitive market are extended payment plans and improved community facilities as developers seeks to offer more value for money.”

We are witnessing from developers a keenness to offer the most affordable prices and payment plans for Egyptians and homebuyers can take advantage of this at the show with flexible and attractive offers spanning up to 8-years in some instances.

Next Move will also include several finance companies including:

Regarding mortgages, the Central Bank of Egypt started an initiative to provide mortgages with levels of interest ranging between 5% and 10.5% per annum; depending on the income level.

What are your thoughts on the middle-income housing segment in the country?

Population growth continues to drive housing demand and as Cairo expands to accommodate new developments, there remains a gap in the middle-income segment which is presenting opportunities for mortgages and developers to innovate themselves.

Developers are eager to address the shortage in the middle-income housing gap and have employed a successful business model to make homes affordable through flexible payment terms. The demand also makes addressing this segment a very lucrative investment for the private sector.

While the government is trying to improve access to mortgage financing through regulation, there is also a growing consensus that public-private partnerships could be leveraged to deliver more affordable housing.

We expect to see more middle-income housing projects over the next few years as developers and government look to fill this housing gap in the country by creating more affordable housing that middle-income families can afford.