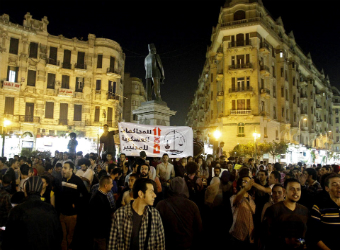 Prosecutors appealed late Monday a court verdict to release 23 activists who were detained a week ago for allegedly breaking a new law on demonstrating.

Twenty-four male protesters have been held in police custody since Tuesday following their arrest for participating in a protest against military trials for civilians in Cairo on the same day. The police had not been informed in advance of the details of the protest — an offence under new legislation passed last week.

Twenty-three of those arrested were ordered to be released on payment of bail of LE5,000 each.

The protest law, issued last week by interim President Adly Mansour, requires protest organisers to notify authorities at least three days prior to the date of any demonstration of more than ten people.

Organisers must give police details of the protest’s location, aims and demands, and failure to comply with the law’s provisions may be punished with fines or jail terms.