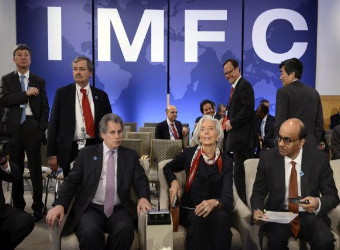 Reforms to the International Monetary Fund have hit a deadlock despite a declaration from global financial chiefs that they would move forward without the United States if it fails to ratify the changes by year-end, a G20 official said on Sunday.

The inability to proceed with giving emerging markets a more powerful voice at the IMF and shoring up the lender’s resources appeared the most contentious issue for officials from the Group of 20 leading economies and the representatives for all IMF member nations who met over the weekend.

In a final communique, G20 finance ministers and central bankers said they were “deeply disappointed” with the U.S. delay.

“Some said that we need to give the U.S. more space,” the official, who participated in the G20 talks and spoke on conditions of anonymity, said. “I say we are at a dead end.”

Any attempt to break the package of reforms, proposed by the G20 in 2010, would be disastrous not only for the United States, but for the whole group, he said, because most countries have already gone through the ratification procedures.

“If you pull the 2010 package apart, you will have to start anew,” the official said. “And this factor cannot be overcome. How to overcome it? Nobody wants to go again through this process for the second time.”

Emerging markets, most handicapped by the lack of reforms, expressed exasperation over the weekend that a four-year wait for the reforms is asking too much of them. But it is unclear what moves could be taken to overcome the impasse.

There could be some ad hoc measures taken to achieve at least some of the governance overhaul for the global lender without formal U.S. approval. Russian Finance Minister Anton Siluanov said developing nations may demand changes to the IMF’s emergency borrowing mechanism if the United States does not approve the overhaul.

Most of the solutions, however, giving the structure of decision making at the IMF, could not be implemented without the U.S. approval. U.S. Treasury Secretary Jack Lew said President Barack Obama’s administration would do its best to push IMF quota reforms through the U.S. Congress this year.

Christine Lagarde, managing director of the IMF, said it is too early to talk about alternatives.

“Plan A is going to be explored to the end, and in depth, but if that plan A doesn’t work, then we will worry about plan B.”

For now, the G20 official said, there is no plan B.

“There is nowhere to go,” he said. “Initially, you have a discussion, but then when you move to details, there is nothing.”

The impasse in the reforms has already had some side effects, including the increase in regional funds that act on a smaller scale, but which altogether could potentially undermine the role of the IMF in the future.

At the G20 meeting over the weekend, officials tried to stay optimistic that the U.S., despite complaints from some Republicans have that the changes would cost too much at a time Washington was running big budget deficits, will come forward.

But the prospects are not promising, the G20 official said.

“It is impossible to defend national interests, and we are all forced to do so, and not offer a breakthrough solution that would respond to current needs,” he said.

“At a time when the world has become multi-polar, why should one country should have the veto power?”