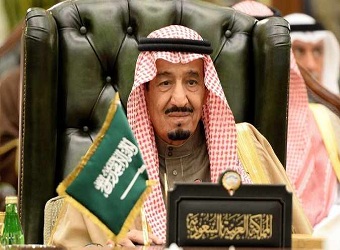 A pact to combat terrorism will be the centerpiece of up to ten agreements that will be signed when Saudi Arabia’s king this week visits Indonesia, the world’s largest Muslim-majority country, the kingdom’s envoy to Indonesia said on Tuesday.

King Salman bin Abdulaziz Al Saud, who on Sunday kicked off a month-long Asian tour, lands in Indonesia on Wednesday with an entourage that local officials have said could number up to 1,500.

Billed as a mega trip, it would be a Saudi king’s first visit to Indonesia in nearly five decades.

Apart from a side-trip of several hours to Brunei, King Salman will be in Indonesia until March 12, spending much of the time on the resort island of Bali, ambassador Osama Mohammad Abdullah Alshuaibi told Reuters in an interview.

“We know Indonesia has suffered from bombing and terrorism here,” he said, adding: “singling out ISIS for its different ideology and disrespect for human life.”

“We will cooperate with the Indonesians on this field. We can exchange data, we can exchange experience, and we can defeat these people,” he further note.

Authorities in officially secular Indonesia have grown increasingly concerned after a series of attacks over the past year blamed on supporters of Islamic State.

Indonesian police killed a militant on Monday after he detonated a small bomb in the West Java city of Bandung. Security officials said they were investigating whether he had links to a radical network sympathetic to ISIS.

Alshuaibi said Saudi and Indonesian military officers are training in each other’s countries to counter ISIS.

Saudi Arabia is aiming to open more Islamic schools in Indonesia, which will teach religion using the Arabic language, and step up the number of scholarships for students, the envoy said.

The king’s visit to Indonesia comes as fringe Islamist groups grow in influence and Muslim leaders take an increasingly strict line on Islamic issues, which is at odds with Indonesia’s traditional brand of moderate Islam Nusantara.

Underpinning that is a growing conservatism among Indonesians, which analysts say is partly the result of Saudi money being poured into the country over the past several decades to build mosques, schools and universities.

The ambassador said the visit could also lay the foundation for developing oil and gas projects and promoting tourism.

Oil giant Saudi Aramco, which has an existing agreement with Indonesian state energy firm Pertamina for $5 billion-refinery upgrade in Central Java, may take on more projects offered by Pertamina later this year, he clarified.

Indonesian President Joko Widodo is hoping the king’s visit will bring investment commitments worth up to $25 billion, Indonesian officials have previously said.

During his trip to Indonesia, the Saudi king will be accompanied by more than 900 people, including ministers, princes and service staff, Alshuaibi said.

Indonesian officials had earlier said the entourage could be up to 1,500 people.

The king will visit Jakarta, the state palace in Bogor, a city south of the capital, and spend the last leg of his Indonesian trip in Bali, Alshuaibi said.

Indonesia will assign at least 9,000 security personnel to protect the king’s entourage, he added.

6th edition of Cityscape Egypt gets ready to launch next month