Financial Institutions
By Administrator On Jun 25, 2013 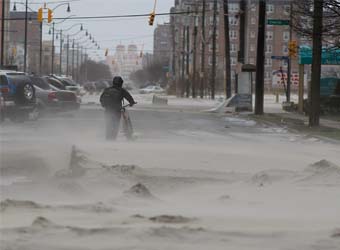 Recent policy cancellations in the homeowners insurance market on Long Island have been on the rise over the past five months, according to U.S. Senator Chuck Schumer, who says the region is seeing the fallout from 2012’s “Frankenstorm,” Hurricane Sandy. Homeowners have not been able to renew their homeowner policies and instead have had to go on the “excess lines” market, where premiums are priced higher — in many cases two to three times higher. Locally, Schumer said, Southold’s 92-unit Founders Village has seen its insurance go from approximately $32,000 to $86,000 — even though it filed no claims for hurricanes Lee, Irene or Sandy.

Schumer’s office has received “dozens of complaints” from Oceanside, West Babylon and Southold.

Schumer chuckSchumer wrote to the Federal Emergency Management Agency’s administrator W. Craig Fugate regarding the issue, expressing, “my grave concern regarding the ongoing withdrawal of major insurance carriers from the Long Island market, and to urge the Federal Emergency Management Agency to take prompt action to discourage this and similar withdrawals. It is within FEMA’s authority, and in FEMA’s interest, to discourage carriers from withdrawing from disaster-prone areas. As promptly as practicable, FEMA should prohibit carriers who withdraw from these markets from participating in FEMA’s National Flood Insurance Program as “write your own” carriers.”

Carriers who sell flood insurance — and thus the reason for the appeal to FEMA — have no financial exposure with the policies because they are backed by FEMA’s National Flood Insurance Program; the companies merely receive “generous fees” for selling the policies, according to the senator’s press release.

Michael Barry of the Insurance Information Institute, an industry organization that exists “to improve public understanding of insurance,” pointed out that the insurance companies still have administration costs implementing flood insurance for FEMA, however.

“Sites have to be inspected, adjusters have to go out, the companies are audited by FEMA regarding money disbursement, so it isn’t just a matter of collecting a fee.”

In his June 24, press release, Schumer stated that 3,700 new excess lines market policies had been taken out in the first five months of 2013, “well ahead of last year’s pace.”

According to Rachel Risinger, State Farm’s New York media specialist, State Farm changed its relationship with the NFIP in 2010 and has not participated in the “Write Your Own Flood” program for almost two years.

“Our process of managing our business and risk profile in coastal regions is ongoing and will continue to evolve as we evaluate coastal exposure and make adjustments where appropriate,” she said. “By planning effectively and balancing the risks we insure, we are in the best position to keep the promise we make to policyholders to help them recover from the unexpected.”

“State Farm is one of the largest writers of homeowners insurance in the state, and remains committed to the New York insurance market and has no plans to withdraw from the state,” Risinger said.

“We’ve seen this before, but personally, I haven’t seen too many more [policies] move to the excess market [recently] than were already there,” said Randy Morreale a partner at The Neefus Stype Agency, an independent insurance agency in Aquebogue.

“Direct writers — they sell only their own insurance, whereas independents likes us have a wider spread of insurers available to them — are looking to increase rates because of their high loss ratios. What they’re doing is now is changing their guidelines. Where it may have been a policy that said ‘1,500 feet from water,’ they’re changing it to ‘2,500 feet,’ for example.”

“I can’t say what percentage difference there is [from regular homeowner polices to excess line market policies] but it can be a big difference.”

First District Assemblyman Fred Thiele, along with Assemblyman Robert K. Sweeney have been working on addressing one facet of the problem of companies pulling out of an area.

“We’ve seen this after Andrew, Katrina and now Sandy,” said Thiele. “Under current state insurance law if an insurer wants to cancel more than 4 percent of the state’s policies it has to get permission of the New York State Department of Financial Services. However, that 4 percent can all be in one place, not statewide. We’ve introduced a bill that passed in the Assembly that says that they need permission if that 4 percent is in one rating area [i.e., Long Island].”

The bill hasn’t passed in the State Senate yet, said Thiele, who added he’s glad Schumer has brought the federal government’s attention to the issue.

“There is a pro-consumer side of this as well,” said III’s Barry. “A lot of the insurers write nationally and they want to make sure their market exposure in response to a catastrophe like Sandy is something they can withstand in order to meet their financial commitment.”