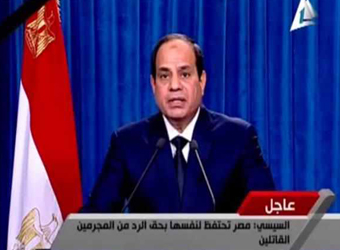 President Abdel Fattah al-Sisi declared a three-month state of emergency on Sunday evening in the wake of two explosions at two Coptic churches in Tanta and Alexandria on Saturday.

He expressed his deep sadness at the day’s events and offered his condolences to the families of those who lost their lives in the attacks which left at least 48 dead and more than 100 injured.

These two attacks are an attempt to destroy Egyptians’ unity, Sisi said in his televised speech which was broadcast on state TV.

He then said that terrorism chases Egyptians whenever they achieve any success and called on the international community to hold countries that finance terrorism accountable.

He concluded by calling on Egyptians to stand strong against terrorism in order to combat this phenomenon.