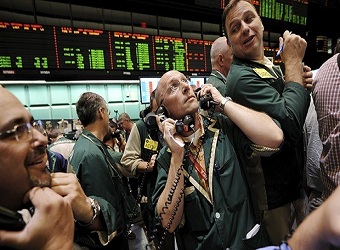 U.S. stocks fell in choppy trade Wednesday, led lower by energy and utilities, after the Federal Reserve raise rates for the second time in a decade.

The Federal Open Market Committee raised its target range from 0.25 percent to 0.5 percent to a range of 0.5 percent to 0.75 percent. The overnight funds rate currently sits at 0.41 percent. In addition to approving the much-expected increase, the FOMC also indicated a higher rate than projected back in September when it last released the quarterly look ahead. The committee now expects three rate hikes in 2017, two or three in 2018 and three in 2019.

The Fed projecting three rate hikes for next year “did catch people off-guard, but but [the Fed] did say four rate hikes for this year,” said JJ Kinahan, chief market strategist at TD Ameritrade. “I think anyone who makes decisions on that is a bit silly because what we’ve seen with Janet Yellen is she let’s the numbers tell the story.”

The Dow Jones industrial average closed about 120 points lower after dropping more than 150 points following the Fed’s announcement, with Caterpillar, 3M and Boeing contributing the most losses. The blue-chips index also hit a new intraday high earlier in the session.

“I think it’s all about reality setting in,” said Peter Cardillo, chief market economist at First Standard Financial. “I think we have to expect more volatility and less momentum buying.”

The S&P 500 dropped about 0.8, with utilities and energy falling around 2 percent. The Nasdaq composite slipped 0.5 percent.

“What happened here was that nobody was expecting the third rate hike” in the central bank’s forecast, said Tom Siomades, head of Hartford Funds Investment Consulting Group. “There was no data that would have necessitated that.”

“If there is a large fiscal stimulus then this will almost certainly create inflationary pressure that the Fed will have to fight by raising rates. It’s far from clear how big any stimulus will be and what impact it will have. The Fed is as much in the dark about this as the rest of us,” said Luke Bartholomew, investment manager at Aberdeen Asset Management.

Most market participants were expecting the U.S. central bank to raise rates by 25 basis points According to the CME Group’s FedWatch tool, market expectations for a rate hike on Wednesday were almost 100 percent.

That said, the environment in which the Fed will likely raise rates is different than last year, said Thomas Wilson, senior investment manager at Brinker Capital. “A year ago, you had high-yield spreads that were at two-year highs. which were telling you something was wrong,” he said. “This year, the macro environment has changed dramatically.”

“The high-yield market is now giving you confidence the economy has improved,” Wilson added.

U.S. Treasurys gave up gains following the announcement, with the two-year note yield rising to 1.2673 percent and the benchmark 10-year yield advancing to 2.5525 percent.

“The market reaction to the rate hike and to some of the comments … are appropriate,” said Erik Schiller, senior portfolio manager at Prudential Fixed Income. “It’s a very consensus path reflected in the dot plots.”

Treasury yields have risen sharply since Trump’s election win, as optimism surrounding possible inflationary policies — such as fiscal stimulus and tax cuts — have flooded the market.

“It is quite amazing how the stock market went from loving slow growth, QE and no rate hikes over the past 7 years and has now transitioned that love to the hopes for quicker growth, no QE and rising interest rates,” Peter Boockvar, chief market analyst at The Lindsey Group, said in a note. “The $64k question in coming years is when higher rates will matter for equity valuations that have only been seen in 1929 and 2000 in many respects.”

John Traynor, CIO at People’s United Bank, said “I call this the rising TIDE,” noting that some of the themes that could cool off the stock market rally include trade, interest rates, the stronger dollar and high expectations for the incoming administration to deliver.

Stocks have also rallied sharply since Nov. 8, with the Dow about 1 percent away from hitting 20,000 for the first time. The blue-chips index has also notched 16 record closes since the election.

“I think that, for the rest of the year, this may continue,” said Wasif Latif, vice president of equity investments at USAA. “But once the new year starts, you could see some give-back.” “Rising rates do act as a tightening mechanism for the economy,” he said.

“The disappointment by the former report offers a reminder that the current rally for the broader indices is based primarily on improving sentiment thanks to the election of the friendliest federal government to business since the ashes of the financial crisis,” said Jeremy Klein, chief market strategist at FBN Securities.

In oil markets, U.S. crude for January delivery fell 3.7 percent to settle at $51.04 per barrel, after the Energy Information Administration reported a drawdown of 2.6 million barrels.

The Dow Jones industrial average fell 118.68 points, or 0.60 percent, to 19,792.53, with Caterpillar leading decliners and Goldman Sachs the top advancer.

About five stocks declined for every advancer at the New York Stock Exchange, with an exchange volume of 1.045 billion and a composite volume of 4.31 billion at the close.

The CBOE Volatility Index (VIX), widely considered the best gauge of fear in the market, traded near 13.2.