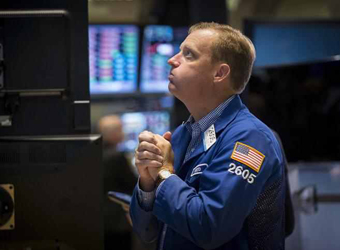 The Dow Jones industrial average fell about 30 points with IBM contributing the most losses.

The index briefly turned positive in afternoon trade after President Donald Trump told The Associated Press his administration will unveil a massive tax cut in a new reform, though the timing of that package was unclear.

The S&P 500 declined 0.3 percent, with telecommunications falling more than one percent to lead decliners.

“We’ve had a pretty decent week, so people are taking a bit of risk off the table ahead of the French election,” said JJ Kinahan, chief market strategist at TD Ameritrade. “Depending on how it goes, it could be really good or really bad for the euro.”

The three major indexes were on track to post slight weekly gains as of 3:08 p.m. ET, with the S&P up around 1 percent for the week. Stocks received a boost from mostly strong earnings reports.

Nevertheless, the major indexes are lower for the month, with the S&P and Dow breaking below their respective 50-day moving averages.

“Investors seem to be optimistic but there are factors dampening that optimism,” said Peter Cardillo, chief market economist at First Standard Financial. “The market is concerned over the French election.”

Uncertainty around the election has grown over the past month after far-left candidate Jean-Luc Melenchon’s surprising surge in the polls. Concerns over a victory from far-right candidate Marine Le Pen rose after a shooting in Paris.

Le Pen has said repeatedly that, if she wins, she’d pull France out of the European Union and the euro zone.

But centrist and pro-European candidate Emmanuel Macron is still the favorite to win the contest, according to French polling firm Ifop. The French presidential election is held over two rounds; the first one will be held Sunday and the second on May 7.

“He crushes each of them, most notably Marine Le Pen and Jean-Luc Mélenchon, in a head-to-head contest. These two outsiders therefore have a much higher mountain to climb in a much shorter period than Donald Trump had when challenging Hillary Clinton,” said Jeremy Klein, chief market strategist at FBN Securities, in a note.

The yield on the French ten-year bond bounced back from a three-month low to trade around 0.93 percent.

Earnings season has gotten off to a strong start. As of Friday morning, 77 percent of the 95 S&P 500 companies that had reported topped earnings-per-share estimates while 67 percent beat on sales, according to data from The Earnings Scout.

The Dow Jones industrial average fell 30.95 points, or 0.15 percent, to close at 20,547.76, with Verizon leading decliners and Microsoft the top advancer.

The S&P 500 declined 7.15 points, or 0.3 percent, to end at 2,348.69, with telecommunications leading nine sectors lower; utilities and industrials were the only risers.

About five stocks declined for every four advancers at the New York Stock Exchange, with an exchange volume of 932.93 million and a composite volume of 3.467 billion at the close.

The CBOE Volatility Index (VIX), widely considered the best gauge of fear in the market, traded near 14.7.