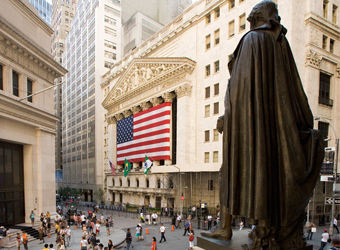 The Dow Jones industrial average gained about 25 points, having risen more than 100 points earlier in the session, with Apple contributing the most gains.

The S&P 500 rose less than 0.1 percent, with utilities falling 1.7 percent to lead decliners and health care outperforming. While the Nasdaq composite rose 0.5 percent as Apple spiked around 6 percent.

The Federal Open Market Committee, the central bank’s policy-making arm, kept its benchmark overnight lending rate target at 0.5 percent to 0.75 percent. Ahead of the announcement, market expectations for a rate hike were just 4 percent, according to the CME Group’s FedWatch tool.

“That was the expectation and they delivered,” said Jason Thomas, chief economist at AssetMark.

“One thing we’re sure is that the Fed is going to telegraph its next move.” “With all the talk about growth, the Fed will have even more pressure to do so,” he said.

There was little in the post-meeting communique to indicate when the Fed might resume the rate normalization process.

However, officials did take note of a change in mood.

“Measures of consumer and business sentiment have improved of late,” the committee said in its statement.

The language was new, and in the arcane process of discerning where the thinking resides among central bankers, significant.

“The market’s fear was that the Fed could’ve been more hawkish; that didn’t happen,” said Matt Toms, chief investment officer of fixed income and Voya Investment Management. “The one thing that could be viewed as more hawkish, and that’s grasping because it was a pretty tame statement, is that the Fed’s 2 percent inflation target could be reached in the medium term.”

The Fed raised rates for just the second time in a decade at its December meeting. The central bank also signaled the possibility of three rate hikes this year.

“Donald Trump’s executive orders have shaken the Fed and they do not want to increase rates as aggressively as previously thought. The unanimous decision by the Fed has made it clear that March meeting may not have much life,” said Naeem Aslam, chief market at Think Markets.

Investors have shifted some of their focus away from the Fed and into the White House, following a sharp rally after President Donald Trump’s election on November 8.

“We’re in a transition period, which I like to call ‘The Great Hand-off’, from monetary policy to fiscal policy,” said Adam Sarhan, CEO at 50 Park Investments.

The stock market’s rally was propelled by the prospects of fiscal stimulus, deregulation and corporate tax cuts.

Equities ended January on a sour note, as the major indexes closed lower the last two days of the month. That said, they managed to close off their session lows on Monday and Tuesday.

In economic news, the latest report from ADP and Moody’s showed private companies added 246,000 jobs in January, well above the expected 165,000. January also turned in the best single-month performance since June.

The ISM Manufacturing index for January came in at 56, above an expected read of 55. December construction spending fell 0.2 percent, while economist had forecast a gain 0.4 percent.

U.S. Treasurys fell broadly but traded off session lows, with the benchmark 10-year note yield holding around 2.475 percent and the two-year note yield near 1.22 percent. The dollar rose about 0.2 percent against a basket of currencies, giving back some of its earlier gains, with the euro near $1.077 and they yen around 113.21.

On the earnings front, Dow component Apple reported better-than-expected quarterly results Tuesday after the close, as the firm said it sold more expensive iPhones. However, its future guidance came in at the lower end of expectations. The stock rose more than 5.5 percent in midday trade.

“Apple pulling a strong quarter is bullish because it shows the consumer, which is a large part of the economy, is in good shape,” said 50 Park Investments’ Sarhan.

Companies reporting before the bell Wednesday included ADP, Johnson Controls and Altria, with all three topping bottom-line expectations, but reporting lighter-than-expected sales. Facebook and MetLife are both scheduled to report Wednesday after the close.

The Dow Jones industrial average rose 26.85 points, or 0.14 percent, to close at 19,890.94, with Apple the top advancer and Microsoft leading decliners.

About four stocks declined for every three advancers at the New York Stock Exchange, with an exchange volume of 902.89 million and a composite volume of 3.906 billion at the close.

The CBOE Volatility Index (VIX), widely considered the best gauge of fear in the market, traded near 11.66.