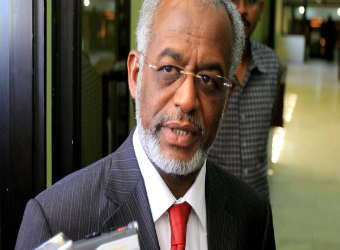 Khartoum and Cairo have agreed on opening a new page in their relations following a short visit by Sudan’s foreign minister, Ali Karti, to Egypt on Monday after which he announced their readiness to improve relations with the neighboring country.

Sudan Tribune has learned that Egypt’s foreign minister, Nabil Fahmy, will visit Khartoum on March 13 to participate in the meetings of the Ministerial Council for the Sahel and Sahara and meets with Sudan’s president, Omer Hassan Al-Bashir, besides discussing suspension of Egypt’s membership in the African Union (AU).

Karti, who spoke in a joint press conference following the meeting, stressed his visit is aimed at improving relations between the two countries, saying they want to open a new page in relations.

“We came to Egypt with an open heart and spirit to remove tensions and plan for the future”, he said

Karti mentioned that ties between the two countries are strong and eternal and added they are working towards promoting it and opening dialogue on contentious issues, underscoring importance for building on points of agreement in order to enhance political and economic relations.

“Border crossings would be installed to connect the two countries and roads between them. Such border crossings will lead to “great openness in commercial ties,” said Karti

The Sudanese top diplomat added that ties between the two countries would be strengthened by discussing issues of cooperation, not contention, adding Egypt plays major role in education in Sudan.

He pointed the neighborly ties between Egypt and Sudan has many advantages including border trade, exchange in various walks of life, and movement of people, saying both countries have invested heavily in facilitating communication between the two peoples

Fahmy for his part said Egyptian-Sudanese relations are of great importance whether at the bilateral, national, or Arab levels, describing it as a “partnership” ties which builds for the future.

“We [the two foreign minister] look positively towards the future and would resume talks on regional issues that concern the two countries”, he added

He mentioned they discussed bilateral ties and the need for developing them and ways for resolving difference in views on certain issues which caused tensions in relations in the past period.

The Egyptian minister further said they agreed on further cooperation in regional issues particularly in the African domain, pointing to full agreement between the countries in this regard.

Meanwhile, the first secretary at the Egyptian embassy in Khartoum, Basil Taman, said illegal weapons enter Egypt through its western border, asserting his country’s interest lies in controlling arms smuggling and cooperating with Khartoum in this regard.

He told reporters following his meeting with the chairman of the parliamentary subcommittee on foreign relations, security, and defense, Malik Hussein, on Monday that Cairo seeks to emulate the Sudanese-Chadian experience in order to protect Egypt’s borders with Sudan to prevent arms smuggling.

The Egyptian-Sudanese border is known to be a smuggling hotspot, and was also recently highlighted in a report by Human Rights Watch as a human trafficking route.

In response to the report, the spokesman for Egypt’s foreign ministry said, “Since 30 June 2013 we have had better control over our borders, especially with Sudan.” Border guards often discover vehicles filled with people attempting to enter Egypt illegally.

The Egyptian diplomat alluded to his meeting with the delegation of the Sudanese Communist Party (SCP), stressing his country’s support for Sudan’s national dialogue and participation of all political parties in the making of the new constitution and the upcoming elections.

Sudan’s Islamist government has appeared uncomfortable with the recent developments in Egypt given the common ideology they shared with Egypt’s ex-president Mohamed Morsi and the Freedom and Justice Party (FJP) which brought him to power.

However, Khartoum insisted that it is neutral to the change in Egypt and that it is an internal matter.

Furthermore, Cairo was irked by Khartoum’s support of Ethiopia’s plan to build the Renaissance dam which Egypt argues will impact its Nile water share needed for its population of 90 million.

The issue of the disputed border region of Halayeb flared up with officials in Khartoum asserting that it is a Sudanese territory despite Egyptian “occupation” of it.

France’s AXA to sell Gulf operations to GIG for $269…