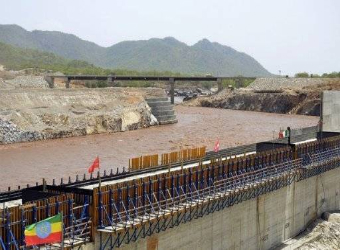 Ethiopia’s project is a $4.2 billion hydroelectric dam on the Blue Nile, one of the main tributaries of the Nile. It is a source of concern to Egypt, since it is still undetermined how it will affect Egypt’s Nile water share, the country’s main source of potable water.

In talks last January between Egypt, Ethiopia and Sudan, negotiations hit a dead-end, with MENA reporting that Ethiopia refused to discuss the terms of “confidence-building measures,” which Egyptian officials say must be changed in order to avoid reduction of Egypt’s Nile river water share.

Abdel-Muttalib, who retained his position in Egypt’s new interim cabinet, said Egypt’s Nile water share is a “red line” that Egypt won’t allow to be crossed.

He reiterated that the country encourages development in Ethiopia, without harming Egypt’s water rights.

On Saturday, a spokesman of the government-owned Ethiopian Electric Power Corporation reportedly said some 32 percent of construction of the Ethiopian Grand Renaissance Dam has been completed, with efforts intensifying to complete the rest.

Spokesman Miskir Negash said construction of the dam has been ongoing “day and night,” adding that the dam has so far employed 7,000 people.