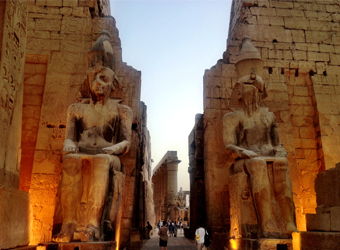 Share
A shaft of sunlight illuminated on Thursday the usually dark sanctum of the Karnak temple, an ancient complex in the southern city of Luxor, in a rare astronomical phenomenon that happens twice a year.
The phenomenon was observed at 6 a.m. Thursday and lasted for an hour.
The event was attended by a number of officials including governor of Luxor، archeologists، astronomers، as well as Egyptologists and a number of tourists.

The spectacle usually draws thousands of tourists to the famed site to watch the ancient tribute, which occurs twice a year to mark the summer and winter solstice.

The event marks the beginning of winter solstice, an astronomical event that occurs in the northern hemisphere marking the longest night and shortest day of the year.

On the other hand, Egypt has witnessed a significant increase in the third quarter of 2017 amounted to 55 percent compared to the same period last year، according to state statistics body CAPMAS.

The figures showed that the number of tourists during the third quarter in 2017 exceeded 2.3 million، compared to just over 1.5 million tourists in the previous year’s third quarter.

Egypt’s tourism revenues jumped 211.8 percent year-on-year to $5.3 billion in the first nine months of 2017، a government official said in October.