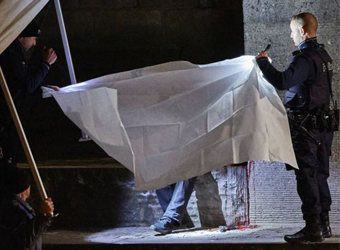 A man who shot and wounded three people at an Islamic centre in the Swiss city of Zurich has been found dead a short distance away.

The attacker opened fire on Monday evening at a Somali-Islamic centre close to Zurich station.

A body and a gun were later spotted under a bridge a few streets away. Police confirmed it was the attacker.

The only information police have given so far is there is no indication of a link with so-called Islamic State.

Two of the victims, aged 30 and 56, were severely wounded while the third man in his mid-30s was in a less serious condition, reports said.

Local media said that around 10 people had been at the centre when the gunman entered the building at around 17:30 (16:30 GMT), wearing dark clothes and a woollen hat.

After opening fire, the gunman ran off and police began a search of the surrounding streets. His body, with a gun beside it, was eventually found beneath the Gessner bridge a few hundred metres away.

Most of the centre’s congregation comes from Somalia, Eritrea and North Africa.

One worshipper at the centre told Neue Zuercher Zeitung that people there were very scared.

“Our children come to the mosque every weekend. But now I wonder if we’re still safe here,” he said.