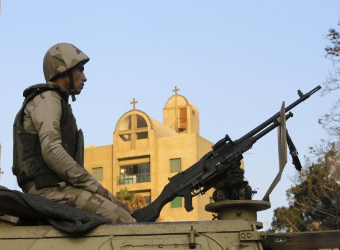 Millions of Egyptian Christians thronged churches across this mainly Muslim nation for Christmas Mass, held Monday amid unusually tight security but with congregations filled with hope ahead of a key vote on a new constitution that enshrines equality and criminalizes discrimination.

The stepped up security was in response to fears that Islamic militants loyal to ousted President Mohamed Morsi would target churches. Islamists claim that Egypt’s Christians played a disproportionately large role in the mass protests that preceded Morsi’s ouster in a July 3 coup.

Many churches, especially in southern Egyptian strongholds of radical Muslims, held Midnight Mass several hours early so that worshippers could avoid returning home after midnight when streets are empty, raising the possibility of attacks.

A wave of attacks blamed on Islamists in August left dozens of churches destroyed, burned or looted. Christian homes and businesses were also targeted.

“We will pray under the night sky,” said Adel Shafiq, a Christian from the town of Dalga south of Cairo, who was attending Mass in a church looted and burned in August. “There is no roof and no windows. People are here wearing scarves and hats to fend off the night cold.”

At Cairo’s St. Mark’s Cathedral, seat of the Coptic Orthodox pope, police armed with machine-guns manned sandbag positions outside the towering structure. Hours before Mass, sniffing dogs were deployed to ensure there were no explosives planted inside.

During the service, plainclothes security men stood guard just metres from the altar to keep an eye on the congregation as Coptic Pope Tawadros II led the prayers. Cabinet ministers, army generals and politicians, mostly Muslims, attended the service.

“We pray for the safety, peace and calm of Egypt and we pray for every man on its kind land,” Pope Tawadros said in a brief sermon. “We have total confidence that God is watching over our nation even at the time of crisis.”

Elsewhere in Cairo and other main cities, streets leading to large churches were sealed off and checkpoints were set up in areas with sizable Christian communities as armored army and police vehicles roamed the streets.

Metal detectors were placed at the entrances of many churches, where volunteers searched bags and demanded to see IDs, leading to the formation of long lines outside churches.

The tight security appeared to do little to dampen spirits, however.

“People are happy and the barrier of fear has been breached. We have seen the worst already, it’s over,” said Evon Lutfi, a Christian from the southern city of Assiut, a stronghold of radical Islamists and home to a large Christian community.

Egypt’s Christians account for some 10% of the nation’s 90 million people. Mostly members of the Orthodox church, one of Christendom’s oldest, they long have complained of discrimination by the nation’s Muslim majority. They have heavily invested in the anti-Morsi movement in the hope of gaining equal rights with their Muslim compatriots after his removal.

The amended constitution Egyptians will vote on later this month in a nationwide referendum enshrines equality between all Egyptians and instructs the next parliament to legislate a new law that will facilitate the construction and maintenance of churches. It also removes language in the 2012 constitution that critics feared could pave the way to the creation of a purist Islamic state, something that gravely alarmed Christians.

“We will vote ‘yes’ in the referendum so we can have a nation free of discrimination,” said Fawzy Habib, a Christian accountant from Assiut.

The post-Morsi administration hopes the draft, a heavily amended version of an Islamist-tilted charter adopted under Morsi in 2012, will receive a comfortable “yes” majority in the January 14-15 referendum to enshrine the legitimacy of the regime and allow it to move confidently to the next step of its political transition plan: presidential and parliamentary elections. Morsi’s supporters are boycotting the vote, which they label as a sham along with the charter itself.

Christians received a huge morale boost Sunday when the country’s interim leader, President Adly Masnour, made a rare visit to St. Mark’s Cathedral and met with the Coptic pontiff. His visit underlined efforts by the military-backed government to project an image of inclusion ahead of the referendum.

The highly symbolic visit was the first of its kind since socialist leader Gamal Abdel-Nasser attended the cathedral’s consecration ceremony more than 40 years ago.

St. Mark’s Cathedral was attacked by a mob last April, heightening Christians’ concern over Morsi’s rule and laying bare their vulnerability. Morsi quickly condemned the violence, but in an unprecedented direct criticism, Pope Tawadros accused him of failing to protect the cathedral.

Intel Shows Off Wearable Gadgets As Chipmaker Expands Beyond Pcs