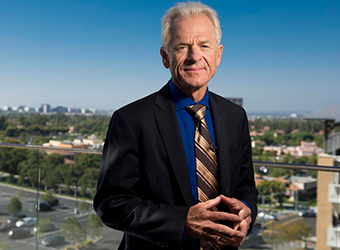 The University of California, Irvine professor will serve as assistant to the president and director of trade and industrial policy. In a statement released on Wednesday, the president-elect’s transition team said Navarro will work on trade policies that “shrink our trade deficit, expand our growth and help stop the exodus of jobs from our shores.”

“The mission of the National Trade Council will be to advise the president on innovative strategies in trade negotiations, coordinate with other agencies to assess U.S. manufacturing capabilities and the defense industrial base, and help match unemployed American workers with new opportunities in the skilled manufacturing sector,” the transition team said.

Navarro, a harsh critic of the state of U.S. trade relations with China, advised Trump during a campaign in which he called to renegotiate key trade deals and crack down on Beijing. As a candidate, Trump targeted the Asian giant as a driver of manufacturing job losses in the United States.

The president-elect frequently said he wanted to change the trade balance between the countries, contending that China unfairly devalued its currency to make its exports more competitive. Trump has only ramped up his rhetoric against China since his election, provoking Beijing several times.

During the campaign, Navarro and Trump’s Commerce secretary pick Wilbur Ross advised him on trade. The transition team previously said Ross will lead trade policy in Trump’s administration and it’s unclear if that has changed with the Navarro pick.

The pair offered their views on what Trump administration trade policy should look like in a CNBC column in July. In it, they bashed what they called hollow victories for the United States in World Trade Organization disputes with China.

They highlighted what they deemed “four of the most potent unfair trade practices many of our trade partners routinely engage in — currency manipulation, intellectual property theft, and the use of both sweatshop labor and pollution havens.” They argued that WTO membership did not protect the U.S. from those tactics.

They argued against trade deficits and said the U.S. should be able to renegotiate deals if “gains are not distributed fairly.”

“Besides hurting our workers, chronic trade deficits stifle economic growth while we now owe China and other trading partners trillions in U.S. Treasury debt,” they wrote.

They go on to write: “In any negotiation or renegotiation, our guiding principle should be this: Enter into a free trade agreement only if it both increases total trade and reduces our trade deficit. When these two conditions are met, real world trade will converge with textbook theory, this country will be far more prosperous, and a now shattered faith in the global trading order will be restored.”