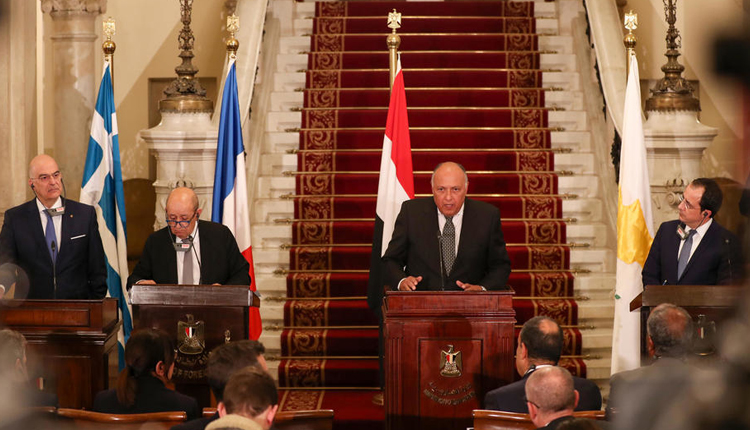 France, Greece, Egypt and Cyprus  declared “null and void” agreements between Ankara and Libya assigning Turkey rights over a vast area of the eastern Mediterranean.

A statement issued by the foreign ministers of the four countries — who met in Cairo — said the controversial agreements undermined regional stability.

Their Italian counterpart, who also took part in the meeting, did not sign the statement.

The two agreements denounced by the four Mediterranean states are a military pact and a maritime deal, signed in November by the head of Libya’s Government of National Accord Fayez al-Sarraj and Turkish President Recep Tayyip Erdogan.

Ankara is a key ally of the GNA in its fight against eastern Libya based strongman Khalifa Haftar.

Libya has seen a recent escalation of the turmoil that has gripped the oil-rich country since a NATO-backed uprising killed dictator Moamer Kadhafi in 2011, with Haftar trying to capture Tripoli from the UN-recognised government.

On Wednesday, Erdogan announced that Turkey has deployed 35 soldiers to Libya to support the GNA in a non-fighting capacity against Haftar, who is supported by Ankara’s rivals the United Arab Emirates and Egypt.

But it is the maritime delimitation agreement that has outraged Greece, Egypt and Cyprus, awarding Turkey exploration rights in a gas-rich area of the Mediterranean where the three states also have significant interests.

The agreement “infringes upon the sovereign rights of third states, does not comply with the law of the sea” and does not have legal enforceability, the ministers said in their statement.

The ministers “reiterated the necessity of full respect of the sovereignty and the sovereign rights of all states in their maritime zones in the Mediterranean.”

They condemned Turkey’s drilling in the exclusive economic zone and territorial waters of the Republic of Cyprus, calling on Ankara to “immediately cease all illegal exploration activities”.

Cyprus is divided between the south — an EU member state — and the north, which has been occupied by Turkey since 1974 in response to an Athens-engineered Greek Cypriot coup.