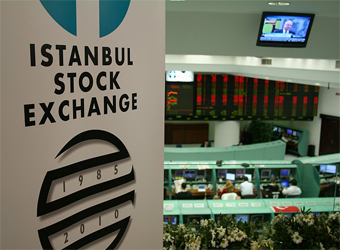 Istanbul’s stock exchange (ISE) suffered its biggest one-day loss in a decade as it closed down 10.5 percent lower as anti-government protests stretched into a fourth day on Monday.

Investor concern mounted and the Turkish lira weakened to 1.8830 against the dollar, a decline from 1.8706 on Friday.

Earlier on Monday, the yield on Turkey’s benchmark 10-year bonds climbed to 7.12 percent from 6.84 percent on Friday.

After tens of thousands more protestors took to the streets on Sunday night as the wave of anti-government sentiment spread throughout the country, Turkish Prime Minister Tayyip Erdogan accused opposition parties of provoking the unrest.

“The main opposition party which is making resistance calls on every street is provoking these protests … This is about my ruling party, myself and the looming municipal elections in Istanbul and efforts to make the AK Party lose votes here,” he said in an interview broadcast on Turkish television over the weekend.

Erdogan, the leader of the ruling Justice and Development (AKP) party, a pro-Islamic party perceived to have parted with the republic’s secular tradition, added that the protests were “entirely ideological.”

Protests in the Turkish capital Ankara and in the country’s largest cities, Istanbul, Izmir and Adana continued into the night on Sunday with protestors calling Erdogan a “dictator” and calling for an end to his “authoritarian rule.”

Riot police reportedly used water cannons and tear gas to disperse crowds in Istanbul, provoking widespread anger among the public. The country’s Interior Minister Muammer Guler said there had been more than 200 demonstrations in 67 cities around the country, according to the Hurriyet newspaper.

The protests started in Istanbul on Friday when trees were pulled up in the city’s central Taksim square as part of plans to build a shopping mall in the area, but have since spread to become a wider protest against the conservative AK party and its pro-Islamic stance.

The party has presided over Turkey’s economic boom which has made it the fastest growing economy in Europe in 2011, growing 8.5 percent, the second fastest after China among major emerging market economies. However, in 2012, Turkey — like China — experienced a slump.

Nicholas Spiro, head of Spiro Sovereign Strategy, told CNBC on Monday that souring investor sentiment towards Turkey, a country which he said was “one of the world’s biggest economic success stories,” was part of a wider trend.

“Turkey received its second investment-grade credit rating last month [and] its economy and banking sector are significantly more resilient than they were a decade ago, notwithstanding a large current account deficit which remains a source of concern.”

“Equity and debt markets have sold off this morning but were already suffering due to the general deterioration in sentiment towards emerging markets,” he said.

Virginie Maisonneuve, head of global and international equities at Schroders, told CNBC that the protests could get worse if the economy in Turkey stalled further.
“One of the things that we’re watching carefully is the deficit. Because although it’s one of the best performing countries versus other emerging markets, given the size of the deficit what happens to the oil price is very important to them,” she told CNBC Europe’s “Squawk Box.”

“What has interested me is how the oil price has remained quite stable despite anemic growth around the world…but if you believe we’re on the path to normalization you have to really watch what the oil price is going to do and what the impact will be on Turkey.