U.S., Allies Were Near a Deal for Peaceful End to Egypt Crisis 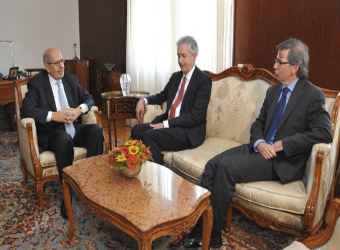 Two weeks before the bloody crackdown in Cairo, the Obama administration, working with European and Persian Gulf allies, believed it was close to a deal to have Islamist supporters of ousted president Mohamed Morsi disband street encampments in return for a pledge of nonviolence from Egypt’s interim authorities.

But the military-backed government rejected the deal and ordered its security forces to break up the protests, a decision that has resulted in hundreds of deaths and street clashes that continued Friday in the capital.

The agreement nearly brokered two weeks ago sought statements of restraint from both sides and an inquiry into competing claims of violence and mistreatment, said Bernardino León, the European Union’s envoy for Egypt. That was supposed to be a prelude to talks between the Muslim Brotherhood and the government.

Former Egyptian vice president Mohamed ElBaradei appeared to back the deal but could not convince Gen. Abdel Fatah al-Sissi, the head of the military, León said. ElBaradei resigned after violence erupted.

The proposal was the result of weeks of visits and calls to Cairo by an unlikely diplomatic coalition representing supporters and opponents of Morsi and declared neutral parties, led by the United States.

The diplomatic squeeze play was meant to underline strong international opposition to any violent government action against Morsi’s supporters and to tell the Muslim Brotherhood it had no choice but to disband street encampments.

Together with Deputy Secretary of StateWilliam J. Burns and the foreign ministers of Qatar and the United Arab Emirates, León presented a proposal to scale back protests and initiate talks between the Muslim Brotherhood and the government, participants said.

“It was a quite simple package the four of us were supporting,” León said in a interview, but one that would be difficult to resurrect now.

The envoys had hoped to clear the squares without violence and set the stage for the transition to elections that the military had promised when it pushed Morsi from office on July 3, León said.

The failed proposal represented the most intensive U.S. involvement to try to avert bloodshed, and demonstrates the new limits of U.S. influence over both the military and Islamists backing Morsi. Both sides have harshly criticized Washington, and each has accused President Obama of backing its opponent.

For weeks before Wednesday’s government crackdown, Secretary of State John F. Kerry or Burns spoke nearly every day with the foreign ministers of Qatar and the United Arab Emirates, whose influence with the opposing sides in Egypt was often stronger than Washington’s.

The two small, rich Gulf nations play outsize roles in regional foreign policy and tend to back different sides in Mideast conflicts. Along with Saudi Arabia and Kuwait, the two Gulf states are sending more money to Cairo than the United States is, several officials involved in the effort said.

Throughout the six-week crisis, the United States has leaned on the UAE to intercede with the interim government and the Egyptian military, and used Qatar as a go-between with the Muslim Brotherhood. Qatar, which has backed Islamist movements and is accused of backing militants in Syria, has emerged as a leading international backer of the Brotherhood.