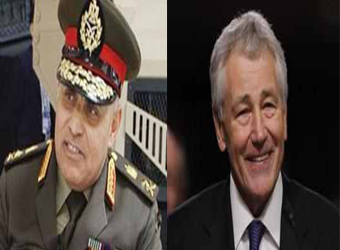 “Secretary Hagel congratulated General Sobhi on his promotion and expressed his desire to maintain close contact as the general settles into his duties,” Pentagon press secretary John Kirby said in a Sunday statement.

Sobhi, formally army chief of staff, was named defense minister and head of the army in late March, replacing Abdel-Fattah El-Sisi, who resigned his posts to stand for a presidential poll he is tipped to win easily.

These included the “ongoing threat of terrorist networks, as well as the importance of free and fair elections for Egypt’s political transition.”

The 26-27 May election is a landmark in the country’s transitional roadmap, set out by the interim authorities following the army’s ouster of Islamist president Mohamed Morsi last summer amid millions-strong protests against his single year in power.

During Sunday’s conversation, both leaders reaffirmed their commitment to strong US-Egypt ties, the press secretary said.

The US suspended much of its annual $1.3bn military aid to Egypt last October following Morsi’s removal and the ensuing use of violence against his supporters.

US officials say Washington was still re-evaluating its relationship with Egypt and determining the status of the frozen aid.