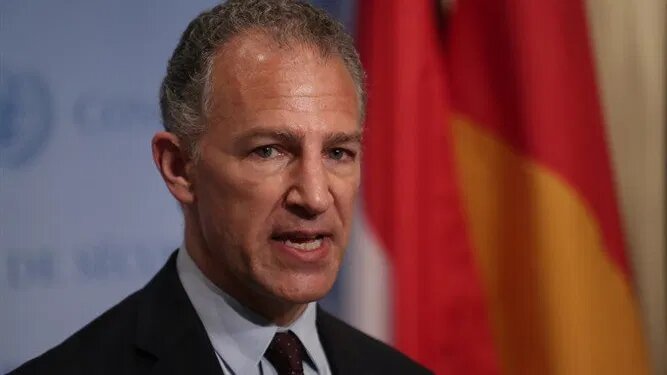 The U.S. is optimistic about Egypt’s economy and is aware of the many opportunities that can be tapped in the market by American businessmen and companies, said U.S. Ambassador to Egypt, Jonathan Cohen on Tuesday.

Ambassador Cohen made his statements to the monthly webinar held  virtually by the American Chamber of Commerce in Cairo.

Building partnerships, creating platforms of collaboration, and tapping the opportunities the Egyptian market has were the key areas that Cohen touched upon.

Cohen asserted the robust partnership between the U.S. and Egypt that has lasted for decades in the areas of military, diplomacy, and economy.

He highlighted cooperation between the two countries in several issues, including the COVID-19 crisis, the Libyan issue, and the Grand Ethiopian Renaissance Dam, as well as continuing to support the peace process in the region.

Moreover, Cohen revealed that the US has invested over $80 billion in Egypt over the last 43 years.

He also lauded Egypt’s economic reform programme, which was implemented between 2016 through 2019, saying that it helped Egypt accumulate the buffers that helped the country navigate the ongoing crisis. These reforms have led Egypt to witness a positive growth in 2020, the only country in the region to do so, according to the International Monetary Fund’s estimations.

Global credit institutions have also praised Egypt’s economy and its resilience in the face of the pandemic, according to Cohen.

Regarding ICT, Cohen said that it represents the fastest growing sector in the Egyptian economy, growing by 35 percent in 2020. He asserted the significant opportunities that the sector has, especially with the pandemic’s implications and how they have proven the major role the sector can play in times of crises.

In terms of transportation, the ambassador said that Egypt’s minister of transport has announced 31 transport projects, which are open to investment, calling interested American investors to take advantage of such opportunities.

Concerning entrepreneurship, Cohen emphasised the private sector’s importance in driving Egypt’s growth and in creating job opportunities, especially with the fast growing population of the country.

In this regard, Cohen pointed to the American-Egyptian Entrepreneurship Fund that dedicates $300 million for supporting entrepreneurs and SMEs in Egypt, adding that 700 entrepreneurs have benefited from the fund so far.

Regarding healthcare, Cohen said that the medical city that Egypt is establishing in the new Administrative Capital also has significant investment opportunities for American business owners, particularly in supplying it with the required medical devices and in exchanging experiences.

In terms of the energy sector, Cohen stressed the U.S. support to Egypt for its aspiration to be an energy hub, calling American investors to benefit from the investment opportunities the sector provides at the present time.

Cohen invited American companies to expand their current business in Egypt and to tap current investment opportunities, illustrating that the U.S. embassy is ready to provide to them with market insights, data on Egypt’s economic condition, as well as linking them with decision makers.