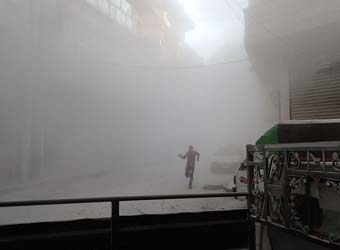 The United States accused Russia on Monday of blocking international inspectors from reaching the site of a suspected poison gas attack in Syria and said Russians or Syrians may have tampered with evidence on the ground.

Moscow denied the charge and blamed delays on retaliatory U.S.-led missile strikes on Syria on Saturday.

British Prime Minister Theresa May and French President Emmanuel Macron faced criticism from political opponents over their decisions to take part in the air strikes.

Syria and Russia deny unleashing poison gas on April 7 during their offensive on Douma, which ended with the recapture of the town that had been the last rebel stronghold near the capital, Damascus.

Relief organizations say dozens of men, women and children were killed. Footage of young victims foaming at the mouth and weeping in agony has thrust Syria’s civil war – in which half a million people have been killed in the past seven years – to the forefront of world concern again.

Inspectors from the Organisation for the Prohibition of Chemical Weapons (OPCW) traveled to Syria last week to inspect the site, but have yet to gain access to Douma, which is now under government control after the rebels withdrew.

“It is our understanding the Russians may have visited the attack site,” U.S. Ambassador Kenneth Ward said at an OPCW meeting in The Hague on Monday.