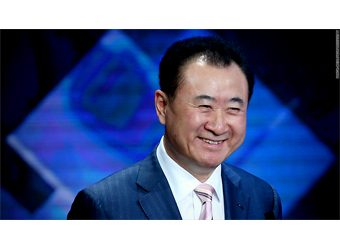 The annual Hurun Rich List 2016 also revealed that there were 754 Chinese billionaires in the world compared with 535 in the United States. There were 594 billionaires in mainland China alone.

The list was a snapshot of wealth as of August 15, said the publisher.

With a personal fortune of $32.1 billion, Wang runs the Dalian Wanda conglomerate which has interests in real estate and entertainment. The company owns U.S. theater chain AMC and movie maker Legendary Entertainment and is in talks to purchase Dick Clark Productions.

The fastest riser on the list was Yao Zhenhua of Baoneng Group, who finished in the fourth position. He shot up 200 spots on the list following a nine-fold increase in his wealth to $17.2 billion. He made the news this year for his aggressive purchases of the shares of leading real estate developer China Vanke.

Others in the list include tech giant Tencent’s founder Pony Ma and and Zhong Qinghou of Wahaha, a beverage maker. Search engine Baidu’s Robin Li and his wife, Melissa Ma, came in the eight spot.