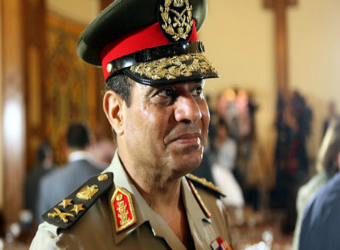 We are still waiting for an answer to why Egypt’s Abdel Fattah al-Sisi hasn’t resigned from his post as minister of defense and announced he’s running for the presidential elections.

There have been several answers and reassurances to this question. The most logical is that the supreme electoral commission has said it has faced technical issues for not yet launching the official candidate-registration process. The commission also said it is working on training employees on how to use electronic voting machines, adding that the training will end on March 23.

In a recent speech, Sisi himself said he won’t turn his back on Egyptians’ demands that he runs for presidency. This was a clear sign that he intends to run for presidential, while finishing off his work at the ministry of defense before leaving it. This will be the first time a high-ranking official of the Egyptian army submits his resignation and runs for the presidency upon the people’s demand.

Before announcing his resignation as minister of defense, there must be domestic preparations to ensure the state’s coherence. Some may wonder whether a day or two will make a huge difference. But the truth is, every minute makes a difference and those who work in the army’s internal affairs know that well.

There’s also a psychological aspect that we must take into consideration. Sisi has spent his entire life among soldiers at the military institution. When he decides to take off his military uniform and take a public job as president, then this requires a certain state of mind and psychological preparation, during which he would study all current and future challenges.

Although all the signs indicate Sisi will run for presidency, there are fears and worries because he hasn’t yet announced his presidential bid. Amid much anticipation, he should clearly reassure Egyptians he has decided to run for the top office.

About the Writer:
Abdel Latif el-Menawy is an author, columnist and multimedia journalist who has covered conflicts around the world. He is the author of “Tahrir: the last 18 days of Mubarak,” a book he wrote as an eyewitness to events during the 18 days before the stepping down of former Egyptian President Hosni Mubarak. Menawy’s most recent public position was head of Egypt’s News Center. He is a member of the National Union of Journalists in the United Kingdom, and the Egyptian Journalists Syndicate. He can be found on Twitter @ALMenawy