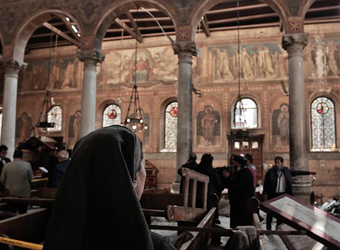 The governments of several countries have expressed condolences to Egypt after a Sunday bomb attack targeting a church in Cairo killed 23 people and injured 49 others.

A spokesperson for EU High Representative Federica Mogherini said in a statement that “our thoughts now are with the victims and their families. The EU expresses its condolences to the bereaved, and stands side by side with Egypt in the efforts to defeat terrorism in their country.”

Russia: President Vladimir Putin denounced the “brutal attack” and expressed his “shock and grief,” particularly given the high number of women and children among the victims.

France: President Francois Holland denounced the bombing in a statement, while French foreign minister Jean-Marc Ayrault condemned the “gruesome attack” and affirmed his country’s support for Egypt in its war against terrorism.

USA: The US embassy in Cairo condemned the attack, while US Secretary of State John Kerry expressed condolences to his Egyptian counterpart Sameh Shoukry in a phone call Sunday evening.

UK: Ambassador to Cairo John Casson said in a statement, “I share the grief and disgust that Egyptians are feeling at the terrorist attack against El-Botroseya Church today and at Friday’s attacks against police officers in Giza and Kafr El-Sheikh.”

Belgium: Foreign minister Didier Reynders strongly condemned the “hateful attack committed today in a Coptic church in Cairo,” expressing his “shock at this attack on civilians, who were killed for their belief.”

Malta: Foreign affairs minister George Vella expressed his government’s sympathy to those injured and the families and friends of the deceased, pledging his country’s full support to Egypt.

The Vatican: Speaking after the Angelus prayer in St Peter’s Square on Sunday morning, Pope Francis expressed special closeness to “dear brother Tawadros II,” the head of the Coptic Orthodox Church, and prayed for the victims.

In the Arab Region, the governments and ambassadors of Saudi Arabia, the UAE, Kuwait, Bahrain, Jordan, Lebanon, and Tunisia have condemned the attack.

Egypt’s Ministry of Health announced in a statement on Sunday evening that the official death toll is 23 people, with 49 injuries.