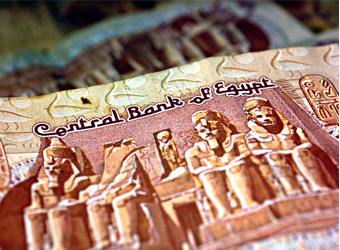 The honeymoon period for Egypt’s pound may be nearing an end.

Nearly four months after a free float opened the floodgates for overseas funds and made the currency the world’s best performer this year, the government got an unpleasant jolt. Foreign investors, who had been almost the sole buyers at Egypt’s local treasury bill auctions earlier this month, were absent for two straight sales.

That coincided with warnings by Renaissance Capital and Standard Bank Group that the pound’s rally may have gone too far.

“The appreciation has been faster than I expected,” said Denise Prime, who helps manage about $5.5 billion of emerging-market debt at GAM UK Ltd. in London. Her fund was one of the first to buy Egyptian T-bills following the pound’s float. “It does make me a little wary of entering at these levels.”

Egypt’s November decision to relinquish control of its currency has been successful.

It has cut the value of the pound by half and that of stocks by a third, making them magnets for foreign investors and helping both assets rally at least 15 percent this year.

But that has also created a dilemma for the government; policy makers need a cheaper currency to sustain the newly-found export competitiveness, and they also need a stable pound to mitigate one of the highest inflation rates in emerging markets.

Lured by a cheaper currency and a Middle East-record $12 billion International Monetary Fund loan agreement signed by Egypt in November, foreign holdings of Egyptian T-bills doubled to 21.7 billion Egyptian pounds ($1.4 billion) in January from a month earlier, according to central bank data.

Their holdings of the notes are still little more than ten percent of the amount they owned before the 2011 uprising that toppled President Hosni Mubarak.

“Yields on treasury bills are very attractive, especially since there does seem to be a shift within the government toward more orthodox policy making and with an International Monetary Fund deal in place,” said economist Jason Tuvey, the Middle East economist for London-based Capital Economics.

He expects the pound to rise to as strong as 14 per dollar this year.

Still, the absence of foreign investors from auctions this past Sunday and Thursday sent the yield on treasury bills, which range in maturity from three months to one year, climbing by more than one full percentage point, according to Samy Khallaf, the head of the public debt department at the Finance Ministry.

The pound’s rally may have run its course, Standard Bank said in a research note, estimating the pound may weaken by about three percent from its current level over the next month.