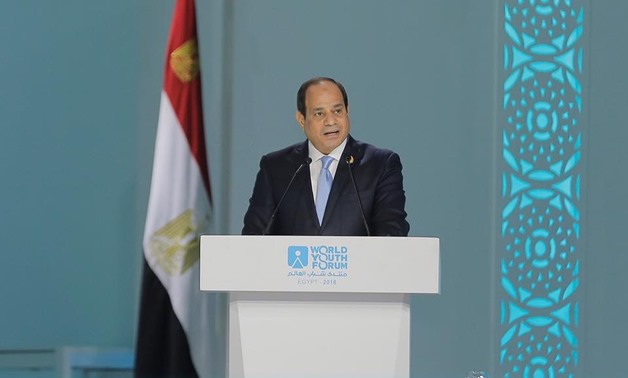 Egypt’s President Abdel-Fattah El-Sisi said the World Youth Forum (WYF) is a platform from which we send a message of love, peace, and constructive dialogue, by which “we unite our resolve towards a better future.”

El-Sisi’s remarks came during the opening ceremony of the third edition of the WYF held in Sharm El-Sheikh on Saturday night.

The WYF engages youth from across the world in an enriching set-up, allowing them to exchange views and recommend initiatives to decision-makers and influential figures.

“I am honoured to announce from here, the blessed land of Sinai, the launch of the World Youth Forum in its third edition in Sharm El-Sheikh,” the president said.

“In the name of God we begin the forum for the good of mankind,” El-Sisi said.

The current edition of the WYF is scheduled to discuss a number of key topics, including the Fourth Industrial Revolution, food security, the Union for the Mediterranean and environmental challenges.

Moreover, topics like artificial intelligence, blockchain technology, women’s empowerment, and the arts and cinema are also on the forum’s agenda.

Heads of state and government, international young leaders, inspiring youth from various fields, prominent international figures and more than 7,000 youth from around the world are participating in this year’s WYF.

The opening session witnessed screening a video message from the Secretary-General of the United Nations António Guterres.

However, too many young people face barriers that prevent them from reaching their full potential. “This is unacceptable,” the UN secretary-general said.

“The United Nations Youth 2030 Strategy recognises that we cannot achieve the Sustainable Development Goals without meaningful participation from young people.

“I encourage you to keep pushing and to overcome poverty and gender inequality,” he added.

Artist Ahmed Helmy, the presenter of the opening ceremony of the WYF, said there is a value that brings people together, which is “our humanity, not our differences.”

“What matters the most is our humanity, not our religion, nationality, or colour,” Helmy added.

Since 2017, the WYF has become an opportunity for youth to engage with top policymakers, network with promising youth from the region and the world that are determined to make the world a better place for everyone.

A documentary film about Egyptian obelisks around the world was screened during the opening session of the forum.

The film showed the presence of 28 Pharaonic obelisks around the world, from London, to Rome, Paris, and Washington.