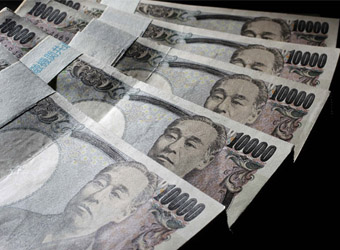 The yen hit an eight-week high against the dollar and made broad gains against other peers on Wednesday, reacting to the latest bout of geopolitical tensions stemming from the Korean Peninsula.

North Korea said on Wednesday it is “carefully examining” plans for a missile strike on the U.S. Pacific territory of Guam, just hours after U.S. President Donald Trump told the North that any threat it presented to the United States would be met with “fire and fury”.

The dollar weakened against the yen, which is often sought in times of geopolitical tension. The U.S. currency was down 0.4 percent at 109.890 yen, following a retreat to 109.740, its weakest since June 15.

“The market had been complacent for a while regarding headlines from North Korea. So it reacted when the North threatened Guam,” said Mitsuo Imaizumi, chief FX strategist at Daiwa Securities.

“Few participants, however, think that North Korea would actually strike Guam at this juncture. So the impact is likely to fade eventually.”

Market participants’ focus has turned to the next trigger points that could heighten geopolitical tensions.

“Dollar/yen has already gone below 110.00 yen, and at this stage we are likely to see the pair begin to bottom out as the market finds time to assess the situation,” said Kyosuke Suzuki, director of forex at Societe Generale in Tokyo.

“The next focal point is whether North Korea conducts a nuclear experiment and how the United States responds.”

Risk sentiment receded, driving down U.S. Treasury yields which in turn weighed on the dollar.

The euro edged down 0.2 percent to $1.1726. The common currency had lost about 0.4 percent overnight after news U.S. job openings surged to a record in June reinforced Friday’s robust payrolls data and supported the greenback.

The dollar index against a basket of six major currencies was effectively unchanged at 93.633 after touching an 11-day peak of 93.876 overnight.

Elsewhere, the the New Zealand dollar’s retreat continued, reaching a three-week low of $0.7309.

The kiwi has been on the back foot all week ahead of the Reserve Bank of New Zealand’s (RBNZ) policy decision due on Thursday, when it is widely expected to keep interest rates unchanged at a record low 1.75 percent.

Despite its recent weakening, the New Zealand dollar is still up more than five percent this year, setting a 26-month high of $0.7557 in July. Concerns are that the RBNZ will attempt to jawbone the currency and turn more dovish, reinforcing the need for low rates.

The Australian dollar, sensitive to shifts in risk sentiment, was down 0.5 percent at $0.7873.