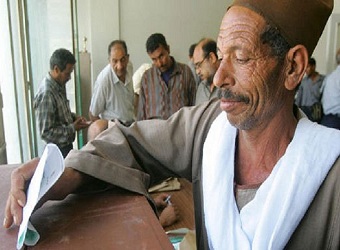 Egypt’s presidential elections are due to take place on 26 and 27 May, the Presidential Elections Commission (PEC) announced on Sunday.

The Country’s new president is due to be announced on 26 June.

A final list of candidates in the upcoming poll will be released on 2 May, with results of the first round of voting to be officially announced on 5 June, according to Ahram Online.

Egyptian expatriates will cast their ballots in the first round of voting on 15-18 May, and on 6-9 June in the run-off.

The announcement of the elections’ date comes after weeks of debate over a controversial electoral law, widely believed to have caused the postponement.

The presidential electoral law, issued by interim President Adly Mansour on 8 March, stipulates that candidates cannot appeal the election results as announced by the PEC, the judicial body overseeing the polls.

Critics have accused the new law of contravening Article 97 of the constitution, which makes administrative orders liable to judicial appeal.

Mansour has argued in favour of the law, however, explaining that while he was initially in favour of allowing appeals, he was eventually convinced that they would delay the electoral process and cast doubts on the new president’s legitimacy, thus impacting national security.

Until this moment, the only candidates to have declared their intentions to run are Hamdeen Sabbahi, who finished third in the 2012 elections, and ex-minister of defense Abdel-Fattah El-Sisi, whose popularity soared following the ouster of Islamist president Mohamed Morsi last July.

The presidential race will be followed by parliamentary polls which, according to the 2014 constitution, must start within six months of the ratification of the national charter.

The post-Morsi constitution was approved by an overwhelming majority on 18 January.