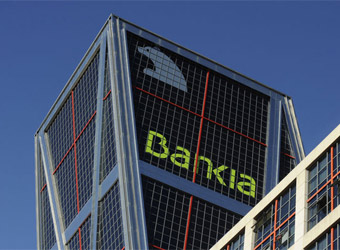 Bankia SA said on Monday that first-quarter net profit more than doubled from a year ago as the Spanish lender, the largest of the country’s banks to be rescued during the financial crisis, benefited from rising interest income which offset sluggish growth in trading volumes.

The bank said net profit rose to EUR187 million ($258 million) in the three months to March 31 compared with EUR74 million in the same period a year ago though the performance was below market expectations. The average forecast of analysts polled by data provider FactSet was for net profit of EUR201.8 million.

The lender’s rate of bad loans as a portion of total loans fell slightly to 14.3% from 14.7% compared with the fourth quarter of last year.

Spain has injected EUR22.4 billion of European Union funds into Bankia to shore up the lender” finances.

The bank was formed in 2010 the merger of seven troubled regional savings banks. Spain sold a 7.5% stake in Bankia in February. The state still owns 61% of Bankia, which is Spain’s fourth-largest bank by market share.