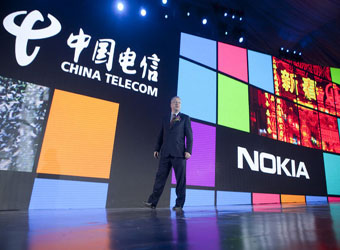 Nokia Corp.’s mobile phone operation has officially been transferred to Microsoft Corp., ridding the Finnish company of a business with legendary status in the telecom industry but that has suffered a brutal fall from grace in recent years.

The transaction’s official closure, announced in a news release on Friday, puts an end to a long drawn process which started almost eight months ago, when Microsoft and Nokia first announced the EUR5.44 billion ($7.52 billion) deal.

In its release, Nokia said there had been some purchase price adjustments relating to net working capital and cash earnings, which mean that it expects the total transaction price to be slightly higher than the earlier-announced price tag of EUR5.44 billion.

At Nokia’s former headquarters, a hulking glass and steel building outside Helsinki whose lease now will be taken over by Microsoft, a crane was on standby to remove the Nokia sign, under which a large blue and white banner read “On the move”.

Employees, who had gathered outside to take photos were nostalgic. “We’ve had time to prepare, but it’s sad,” one of them said.

In addition to Mr. Elop, some 25,000 former Nokia employees will join Microsoft. Nokia estimated originally that some 32,000 would move when the transaction was originally announced in September 2013.

However, the figure is now considerably lower because Nokia will retain the ownership of a massive 8,000 employee-strong factory in Chennai, southern India.

The factory, which has the capacity to produce more than 10 million handsets in a month, has been frozen by Indian authorities due to a protracted tax dispute. Indian tax officials allege that Nokia has wrongfully claimed tax exceptions on software exports. Nokia has denied the allegations.

Nokia said it has entered into a service agreement in which it will continue to produce phones for Microsoft as a contract manufacturer. The company is also offering voluntary buyout packages to Chennai workers to help them pursue new jobs outside Nokia.

For Microsoft, the takeover of Nokia’s phone business is a bold move to improve its odds in the mobile-phone business, where it is playing catch-up against the likes of Apple, Google and Samsung Electronics Co.

For Nokia, meanwhile, unloading the unprofitable handset business leaves it with a mobile network arm that competes with the likes of Huawei Technologies Co. and Ericsson. It will also hold on to a digital mapping platform, one of the mobile industry’s largest portfolios of patents and a large pile of cash.

Nokia is expected to announce its new strategic direction, plans for its cash management and name its next CEO next week in conjunction with its earnings report due on Tuesday.

Write to Sven Grundberg at sven.grundberg@wsj.com and Juhana Rossi at juhana.rossi@wsj.com

This was corrected at 1623 GMT because the original misstated the wording of the large blue and white banner referred to in the article in the fourth paragraph as “Nokia moving on”, when it should say “On the move”.

“Nokia Completes Mobile Phone Transfer to Microsoft – 2nd Update,” at 1520 GMT, misstated the wording of the large blue and white banner referred to in the article in the fourth paragraph as “Nokia moving on”, when it should say “On the move”.