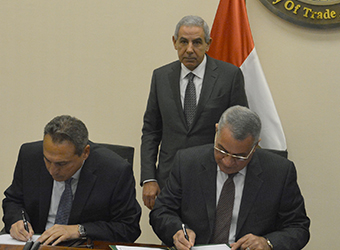 Cairo Company for Urban and Industrial Investment and Development has signed Thursday a cooperation protocol with Banque Misr to provide soft funding for leather tanneries recently relocated to Al-Robeky Zone.

Provided by Egypt’s second largest bank, the state-owned Banque Misr, the funding will be designated to help the leather tanneries to purchase lands, machineries, equipment, and all production requirements.

Mohamed El Gohary, chairman of Cairo Company for Urban and Industrial Investment and Development, and Mohamed Eletreby, chairman of Banque Misr, have signed the protocol.

Minister Qabil told reporters on Thursday that the protocol would provide funding programmes for owners of leather factories, which are being relocating to Al-Robeky zone.

As for the medium-sized projects whose capitals range between 20 million pounds and less than 100 million pounds, the bank will give financing at seven percent interest rate, Eletreby added.

The financing will be from one year to 10 years, involving a two-year grace period, Banque Misr’s chairman stated.

Al-Robeky zone, 54 km east of Cairo, is the first specialised industrial zone to which leather tanneries in Magra El Oyon region would be relocated.

It is expected to seize around 45-55 percent of leather products, thus, upgrading tanning processes to cope with the latest global systems.