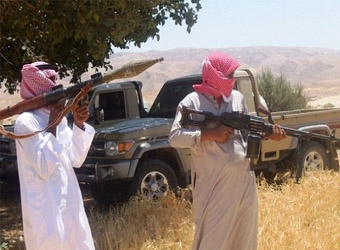 Bedouin gunmen in Egypt’s Sinai Peninsula seized and briefly held the country boss of U.S. oil major ExxonMobil and his wife on Thursday, in an attack that highlights increasing risks oil firms face across North Africa and the Middle East.

Exxon said Andy Wills, chairman and managing director of its Egypt and Cyprus operations, and his wife were both unhurt.

The British couple were seized when they stopped to change money in Ras es-Sidr, 150 km (93 miles) southeast of Cairo, while driving to a Sinai beach resort, Egyptian security sources said. The couple were held for several hours before being handed over to the army after negotiations with tribal elders.

“ExxonMobil confirms that the chairman and managing director of ExxonMobil Egypt and Cyprus and his wife are safe and unharmed after being held briefly earlier today,” Exxon spokesman Alan Jeffers said.

Security has become a top concern for oil companies as they face soaring bills to strengthen defenses against militants following a siege at an Algerian gas plant in January in which dozens of foreign workers were killed.

Since that siege, security incidents have hit a field in Iraq operated by Russian oil firm Lukoil, where local residents descended on facilities to demand jobs, and a gas plant in Libya jointly owned by Italy’s ENI, where clashes between rival militias halted work.

Oil firms say they have strengthened security in North Africa following the Algerian hostage drama, including in Egypt.

Security has deteriorated in Egypt’s isolated Sinai desert region since the overthrow of President Hosni Mubarak in a popular uprising two years ago.

Thursday’s gunmen demanded the release of four prisoners held in Alexandria on charges of arms smuggling, the Egyptian security sources said. It was not immediately clear whether they were aware of the identity of their captives.

South Sinai’s Red Sea coast is a major tourism area for Egypt. Other tourists have been held briefly by tribesmen in recent months and released unharmed, often after just a few hours of negotiations with authorities.

Bedouin have attacked police stations, blocked access to towns and taken hostages to show their discontent with what they see as their poor treatment by Cairo and to press for the release of jailed kinsmen.

Two other U.S. tourists were kidnapped in late May that year, and two more U.S. tourists in July. The captives were released within days in both incidents.

Exxon has more than 350 petrol stations in Egypt and says it exports lubricants and products from Egypt to more than 25 countries in Africa, the Middle East, Europe and the Far East.