Bernanke Resets Policy by Doing Nothing as Markets Soar 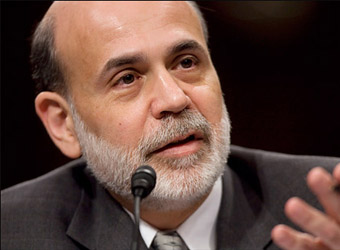 Ben S. Bernanke reinforced his standing as the most activist Federal Reserve chairman in history by doing the unexpected: nothing.

The policy-setting Federal Open Market Committee yesterday refrained from reducing the $85 billion pace of its monthly securities buying, sending stocks to record highs and triggering the biggest rally in Treasuries since 2011 as investors repositioned for a more accommodative central bank. Bernanke said the Fed must determine its policies based on “what’s needed for the economy,” even if it surprises markets.

The decision to abstain from tapering bond purchases underscored Bernanke’s willingness to do anything to lower unemployment and pushed back expectations for a tightening of policy, according to Lou Crandall, chief economist at Wrightson ICAP LLC in Jersey City, New Jersey. Bernanke said he was concerned that market interest rates, driven higher by his own suggestion he would scale back so-called quantitative easing, would curb growth.

“The overriding message the Fed wants to send is that it remains completely committed to providing as much support as necessary,” Crandall said. “The Fed’s goal in surprising the market here was to really cement the credibility” of its interest-rate guidance by showing its primary concern is encouraging growth, he said.

Crandall had predicted the Fed would cut its bond buying yesterday, and said he now expects the central bank to do so in December, though it is “far from a done deal.” He said the Fed may continue the program into the third quarter of next year, up from a previous expectation of a mid-2014 end.

Bernanke, whose term ends Jan. 31, has kept interest ratesnear zero for almost five years and swelled the Fed’s balance sheet to a record of $3.66 trillion through buying Treasuries and mortgage-backed securities. In his press conference yesterday and in his policies since the financial crisis, Bernanke has refused to give up on the power of monetary policy or the ability of the U.S. economy to eventually heal from the worst recession since the Great Depression.

Bernanke said he was “somewhat concerned” by the impact of rising bond yields on the economy and wanted to “wait a bit longer and to try to get confirming evidence” that the economy is showing signs of lasting improvement. He also said the impact of “restrictive fiscal policies” poses risks.

To the extent “our policy decision today makes conditions just a little bit easier, that’s desirable,” Bernanke said. “We want to make sure that the economy has adequate support.”

Bernanke was largely responsible for what he called the “rapid tightening of financial conditions in recent months.”

Yields on the benchmark 10-year Treasury note climbed as high as 2.99 percent on Sept. 5 from 1.93 percent on May 21, the day before Bernanke first outlined a possible timetable for a reduction in the asset purchases. In June, $3 trillion was erased from global equity markets in five days after Bernanke said he may reduce monthly securities buying this year and halt it by mid-2014.

“Even though he wasn’t willing to acknowledge it, clearly he’s the person mainly responsible for that backup in rates as he’s the one that started talking about tapering,” said Stephen Stanley, chief economist at Pierpont Securities LLC inStamford, Connecticut. “I’m just stunned and confused.”

Stanley, a former Richmond Fed economist, said yesterday’s decision pushed back by six months his expectations for the beginning of tapering to March and the completion of quantitative easing to the end of next year. He now predicts an interest-rate increase in late 2015, compared with a forecast for the second quarter of 2015 before yesterday’s announcement.

“The Fed backed away from tapering in large part because of the yield jump that it started with the taper talk,” said Karl Haeling, head of strategic debt distribution in New York for Landesbank Baden-Wuerttemberg, one of Germany’s largest banks. “The Fed is conflicted and in turn has confused the market again.”

Since spurring a market rout in June, Bernanke has sought to divorce tapering from the Fed’s interest-rate outlook, a message he sought to reinforce yesterday.

“They probably regret having given quite such a strong signal of being eager to taper, and they may have concluded that it is hard to convince people that the timing of slowing and ending asset purchases is entirely unrelated to the timing of tightening,” said Jonathan Wright, an economics professor at Johns Hopkins University in Baltimore who worked at the Fed’s division of monetary affairs from 2004 until 2008. “So, asset purchases continue a bit longer.”

Central bankers in December linked the federal funds rate to inflation and unemployment. They said that the rate would remain in a range of zero to 0.25 percent so long as the jobless rate was above 6.5 percent and inflation forecasts didn’t exceed 2.5 percent.

Bernanke suggested at his press conference that the unemployment threshold may be too high partly because the rate isn’t telling the whole story of labor market conditions. Unemployment fell to 7.3 percent in August as workers left the labor force.

“The committee would also take into account additional measures of labor-market conditions,” he said. “Thus, the first increases in short-term rates might not occur until the unemployment rate is considerably below 6.5 percent.”

Bernanke “made it clear that they are struggling with the appropriate way to communicate their forward guidance,” said Tim Duy, an economist at the University of Oregon in Eugene who formerly worked at the U.S. Treasury Department. “The current thresholds are overly hawkish given that the unemployment outcomes have been more optimistic than the Fed anticipated.”

Having Yellen as the front-runner gives yesterday’s policy announcement full credibility, saidJulia Coronado, chief economist for North America at BNP Paribas SA in New York, who correctly predicted the Fed wouldn’t taper asset purchases. “He is handing the reins to his partner over the last four years,” she said.

Obama’s aides are making calls to Senate offices to measure support for Yellen, as the president nears a decision on the next central bank chairman, according to three Senate Democratic staff members.

Senator Charles Schumer of New York, the third-ranked Democrat in the chamber and a senior member of the Senate Banking Committee, said yesterday Yellen, 67, would be an “excellent choice.”

Fed officials yesterday reduced their estimates for economist growth this year and next. They predicted U.S. gross domestic product to increase 2 percent to 2.3 percent this year, down from a June projection of 2.3 percent to 2.6 percent.

One of the most surprising features of the Fed forecasts was that policy makers median estimate for their benchmark rate was only 2 percent at the end of 2016 at a time when they expected the unemployment rate to be around 5.4 percent to 5.9 percent, near their estimate of full employment. Typically, central banks want an interest rate that is higher than inflation to balance saving and spending as labor markets reach a point where wages could move up.

Bernanke, 59, explained that policy makers desire to run a stimulative policy even three years from now because the economy could still face headwinds from a slow housing recovery, tighter fiscal policy and “continued effects from the financial crisis.”

Such a low short-term rate at a time of 2.5 percent to 3.3 percent growth, according to policy makers’ 2016 central tendency estimate, may also come with the risk of “some sort of destabilizing asset price environment or inflation,” warned Michael Gapen, senior U.S. economist at Barclays Plc.

Still, policy makers saw little risk of wage growth in 2016 pushing up prices. Their inflation forecast for that year was 1.7 percent to 2 percent.

“What came out of this is that the Fed is a lot more concerned about the downside risks than they let on,” said Scott Anderson, chief economist at Bank of the West in San Francisco. “The Fed blinked.”