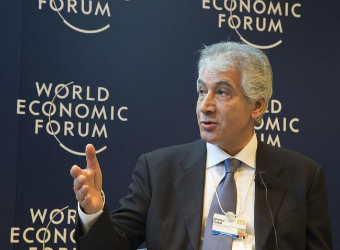 Egypt’s finance minister has told CNBC the recent vote on a new constitution was a “great success”, and said the country was committed to political progress.

Speaking at the World Economic Forum in Davos, Ahmed Galal said that within six months the country would have the building blocks of a new regime, with a constitution, a new president and new parliament.

“We are moving along that political roadmap, we are sticking to it and we are committed to achieving it and doing it very well,” he said. “The (vote) was a great success… so we are very pleased about the progress we are making.”

His comments follow a vote on a new constitution that sets the stage for parliamentary and presidential elections this year. Over 98 percent of voters backed the new constitution, although less than 40 percent of the electorate took part.

It comes amid ongoing political uncertainty in Egypt, which began during the revolution of 2011 and has caused Egypt’s once-vibrant economy to struggle. Economic growth has weakened over the last three years, with officials recording an annual rise of 1.5 percent last quarter — far off the seven-plus percent achieved before the uprising.

Galal admitted there were a host of economic issues in Egypt, but insisted the interim government was right to attempt to reactivate the economy.

“We do have macro economic balances – part of it is the budget deficit – we do have sluggish economic growth with high unemployment, and a strong sense of injustice,” he said. “These are the real challenges.”

Egypt has received support from its wealthy Gulf neighbors Saudi Arabia, United Arab Emirates (UAE) and Kuwait, and Galal said he was “grateful” for the support.

“It has given us the fiscal space that allows us to do what we need to do,” he said.

Earlier this month, Galal told CNBC he refused to rule out requesting further international aid, admitting the country was unable to be “totally self-sufficient.”