The dollar held steady against a basket of major currencies on Monday after pulling back slightly from a 3-1/2-month high last week, pressured by a decline in the benchmark U.S. 10-year Treasury yield.

The dollar’s index against a basket of six major currencies stood at 91.561, steady on the day but down from Friday’s high of 91.986, its strongest level since Jan. 11.

The dollar index had risen more than 1.3 percent last week for its biggest weekly gain in over two months, after the U.S. 10-year Treasury yield rose above the psychologically key 3.0 percent threshold to four-year highs.

The U.S. 10-year yield has since come off that peak and fell 3 basis points on Friday to 2.957 percent, down from a four-year high of 3.035 percent struck on Wednesday.

Earlier this year, the correlation between U.S. yields and the dollar had broken down as investors focused more on trade frictions and geopolitical issues.

Markets, however, have recently turned their attention back to interest rate plays as concerns over the U.S.-China trade dispute and tensions over North Korea’s nuclear program eased, giving the greenback a leg up.

The dollar has risen more than 2.6 percent against the yen in April, putting it on track for its best monthly performance since November 2016. 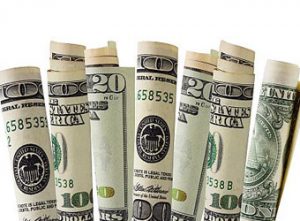 “The dollar has come a long way, and my sense is that it doesn’t have the strength to break above 110 yen for now,” said Satoshi Okagawa, senior global markets analyst for Sumitomo Mitsui Banking Corporation in Singapore.

At the same time, with concerns over geopolitical risks easing, the dollar’s downside risks against the yen also appear limited, Okagawa said, adding that the greenback was unlikely to fall back to the 107-yen handle in the near term.

Some analysts say moves among Japanese investors to increase their foreign currency exposure at the start of Japan’s new financial year have likely contributed to the yen’s weakness in April.

Another factor that is seen as having weighed on the yen recently is speculation about the potential for eventual yen-selling flows related to Japanese drugmaker Takeda Pharmaceutical’s $64 billion bid to buy London-listed Shire.

Events and data coming up this week include the U.S. Federal Reserve’s May 1-2 policy meeting, at which the central bank is widely expected to keep interest rates unchanged, as well as U.S. jobs data due on Friday.

“This week’s U.S. nonfarm payroll number will go a long way to cementing the dollar’s near-term trend,” Stephen Innes, head of trading in Asia-Pacific for Oanda in Singapore, said in a note.

In addition, a delegation of U.S. officials, including Treasury Secretary Steven Mnuchin and President Donald Trump’s top economic and trade advisers – Larry Kudlow, Robert Lighthizer and Peter Navarro – are all expected in China later this week for trade negotiations.

On Friday, the British pound had set a near two-month low of $1.3748 on Friday after Britain’s economy slowed far more than expected in the first quarter of 2018, slashing expectations the Bank of England will raise interest rates in May.