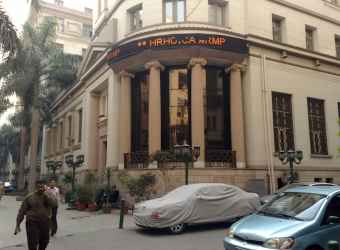 The Egyptian Exchange – EGX had posted gains of EGP 4.9 billion this week as the capital market reached EGP 355.262.

Capital market experts asserted that the sense of calm is restored in Abbasiya district has contributed to witnessing a stable performance for all the EGX indeces within this week’s sessions which consequently reflected in the capital market which had managed to post gains of EGP 4 billion.

The highest close during that week came on Monday closing at EGP 13.85, while the lowest close came on Thursday at EGP 13.33.

Pursuant to the agreement, EFG Hermes and QInvest will enter into a joint venture at the level of EFG Hermes Qatar LLC to be 60% owned by QInvest and 40% owned by EFG Hermes. The JV Company shall be the entity holding the Business post-closing.

This announcement follows the initial press release on March 26, 2012, when the two parties agreed to explore a potential strategic alliance with the aim of creating a leading investment bank with operations in the Arab world and beyond, comprehensively covering the Middle East, Africa, Turkey and South and South East Asia.

EFG Hermes’ position as the largest provider of investment banking, asset management and brokerage services across the Arab world will be strongly complemented by QInvest’s financial strength and client base.

The aim will be to offer an enhanced product offering to QInvest’s extensive corporate and private client base in Qatar and the GCC region and to use the combined platform and resources to expand the joint venture’s reach into the fast growing regions of Sub-Saharan Africa and South and South East Asia.

As a result of the transaction, QInvest will inject US$250m in the form of a capital increase at the level of EFG Hermes Qatar that will be used in consideration for transferring the Business to the JV Company.

EFG Hermes will have the right to sell its entire 40% shareholding in the JV Company to QInvest at any time during the period between 12 to 36 months from signing of the transaction at a price of EGP 1,000m (c.US$165m).

QInvest will have the right to acquire from EFG Hermes its entire 40% shareholding at any time during the period between 12 to 36 months from signing of the transaction at the higher of US$165m or fair market value at the time of the exercise subject to a cap. At closing QInvest will also acquire from EFG Hermes 60% of the seed capital of the asset management business at market value.

Commenting on the announcement, the Chairman of QInvest, H.E. Sheikh Jassim Bin Hamad Bin Jassim Bin Jaber Al Thani said: “We look forward to establishing this strategic partnership with EFG Hermes that will position our firms to leverage the large potential for economic growth in the region and to play a pivotal role in its long-term development.

The alliance will enable us to bring the expertise necessary to capitalize on the desires of many regional and foreign investors who are seeking to play a significant role in the region’s economic development and who are willing to invest across the Middle East, Africa, Turkey and South and South East Asia.”

“Our primary objective reflected by these agreements will be to create an investment banking platform that will play a vital role in the flow of foreign capital into the region while enabling Arab investors to participate in future investment opportunities in the geographies that will fall under the umbrella of this new platform and to continue to build on the success that our team has achieved over the years,” commented EFG Hermes’ CEO Hassan Heikal, who will be overseeing the transition phase to the JV Company.

EFG Hermes’ CEO Yasser El Mallawany commented, saying: “The alliance with QInvest through which we can combine our expertise in our chosen businesses would be a significant turning point in supporting investments in the Arab world and it would crystallize the value of our preeminent investment banking platform.

EFG Hermes’ shareholders will benefit from this alliance which aims to accelerate the development of our businesses and strengthen our footprint with a durable partner for growth.”

Following the closing of the transaction, EFG Hermes will recommend to its board of directors an EGP 4 special dividend per share.

On Monday , EFG Hermes Holding BOD recommended in its meeting to distribute cash dividends of EGP 4 per share after completing deal with QInvest L.L.C. to establish an investment bank.

The company added, in a release sent to EGX that, the deal is expected to be sealed in the third quarter of 2012 .

QInvest will control 60 percent of the new bank, which will be called EFG Hermes Qatar, and will provide $250 million to increase its capital.

Shares in EFG Hermes initially jumped more than 6 percent, prompting the stock exchange to suspend trading for exceeding the 5 percent limit. It dipped back when trading resumed, up 1.8 percent at 13.89 Egyptian pounds ($2.29) by 0938 GMT.

It was the most heavily traded stock in the early part of the session. Monday was the first day of trading since the deal was announced, after the stock was suspended on Sunday.

EFG has recommended a special dividend of four pounds per share to shareholders.

“The market is reacting positively to the four pounds dividend,” said Ahmed Abu Taleb of Pharos Securities. “The stock price (for the deal) was below market estimates but there might be a high discount due to the sensitive time and uncertainty Egypt is going through.”

On Thursday, HC upgraded, in a recent study, EFG-Hermes to Overweight and increased TP 7% to EGP 17/share.

The highest close during the week came on Wednesday closing at EGP 3.35, while the lowest close came on Monday at EGP 3.25.

On last Thursday , Orascom Telecom said it would receive a $2.5 billion loan from its majority shareholder, Russia’s Vimpelcom so it can develop networks in Bangladesh and other markets.

“We are receiving a credit facility worth $2.5 billion from Vimpelcom for five years at an interest rate of 12.5 percent,” Chief Executive Ahmed Abou Doma said in a conference in Cairo. “We need the loan to get liquidity to develop our networks, especially in Bangladesh.”

Abou Doma said the firm had a shortage of liquidity that was mainly caused by its inability to repatriate profits from lucrative Algerian unit Djezzy, which has been in a long-running dispute with the government there

On Sunday , An Algerian court postponed until May 27 an appeal hearing into a $1.25 billion fine imposed on Djezzy, the local mobile phone unit of Russian telecoms firm Vimpelcom, a Reuters reporter in the courtroom said.

The appeal hearing had already been postponed once, a week earlier.

Djezzy chief executive Tamer El Mahdy, who has been convicted in the case and faces jail if the conviction is upheld, was not in court for Sunday’s hearing.

A lower court ruled in March that Djezzy and its CEO were guilty of violating foreign exchange regulations. Djezzy’s parent company denied the allegations against it and its chief executive, and lodged an appeal.

Djezzy has been the subject of a long-running dispute with the Algerian government, during which the firm has been hit by back-tax demands, threatened with nationalisation, and put under criminal investigation.

Under pressure from the Algerian government, Vimpelcom agreed to talks on selling a controlling stake in Djezzy to the Algerian state.

However, the decision to impose the $1.25 billion fine soured those talks and prompted Vimpelcom to announce it was going to international arbitration against Algeria.95.

The highest close during that week came on Tuesday closing at EGP 26.11, while the lowest close came on Sunday at EGP 25.53.

Hisham Ezz Al-Arab, Chairman and Managing Director of CIB, commented on the quarter: “I am pleased with the strong revenue and earnings growth we delivered for the first quarter in the face of political and economic headwinds.

CIB maintained its leading position in both loans and deposits amongst private-sector banks while increasing our net interest margin by 21%.
“Results are even stronger than 2010, with revenues up by 18% compared with first-quarter 2010.

This outstanding performance was achieved alongside a decrease in expenses and maintenance of our high-quality portfolio, reflecting management’s strict focus on costs and asset quality. These results put us well along the way to achieving our 2012 targets by continuing to build momentum across consumer and institutional banking.”

Consolidated revenue was EGP 1.15 billion, up 25% from EGP 922 million in the first-quarter 2011, as CIB maintained its market-leading position among private-sector banks in both loans and deposits.
On a standalone basis, the Bank achieved EGP 1.12 billion in revenues, up 26% over first-quarter 2011.

The most active sectors all through the week were Telecommunications, Financial Services, Real Estate, Construction and Materials and Banks.

Telecommunication came second in terms of performance, as it achieved total traded value of EGP  369,392,407.

Regarding Construction & Material, it achieved total traded value of EGP 174,612,599.

Egyptian investors led the market activity all through the week, followed by Foreign and Arab investors respectively.

Egyptian investors were the most active buyers all through the week as their stock this week earning the value of EGP 105,691,920.

Foreign investors were most active sellers this week by the value of EGP 86,035,977
.

Institutions activity led the market all through the week as it ranged between 38.3-78.97 %.