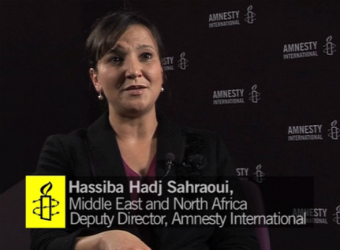 Amnesty International issued a statement on Friday denouncing a counter-terrorism law drafted by the Egyptian government, saying that it must be scrapped or fundamentally revised.

According to the statement, the draft law has expanded the existing definition of terrorism to include actions that try to damage national unity, natural resources and monuments, as well as aiming to hinder the work of judicial, regional and international bodies and diplomatic and consular missions in Egypt.

Also included in the terrorism definition is “any behaviour or preparation with the purpose of damaging communications, or information systems, or financial and banking systems, or the national economy” – terms that the Amnesty statement says are too broad.

“The problem with these vaguely worded ‘terrorist offences’ is that they potentially allow the authorities to bring a terrorism case against virtually any peaceful activist,” said Amnesty International’s Middle East and North Africa Deputy Director Hassiba Hadj Sahraoui.

The controversial law was sent to interim President Adly Mansour for ratification on 3 April, following months of discussions concerning a rise in militant attacks against army and police troops.

Sahraoui stresses that while the Egyptian authorities have a duty to prevent, investigate and punish violent attacks, officials must also abide by their obligations under international law.

Amnesty also accuses the legislation of widening the scope for the future use of the death penalty, allowing it to be imposed “even where terrorists acts committed do not cause loss of life”, including the crimes of founding, managing or administering a terrorist organisation.

Last March, an Egyptian court sentenced 529 supporters of deposed president Mohamed Morsi to death on charges of murdering of a high-ranking police officer during riots last August sparked by the violent dispersal of two pro-Morsi sit-ins in Cairo.

Also in March, another 26 were sentenced to death for orchestrating attacks on army and police personnel, Christians and tourists.

Since Morsi’s ouster, Egypt has seen a spike in terrorist attacks on security installations and personnel.

The attacks, which initially began in the restive Sinai Peninsula, eventually spread across several governorates, including the capital.

Interim authorities have blamed Morsi’s Muslim Brotherhood and their Islamist allies for orchestrating the violence and plotting against the country. However, the Islamist groups have frequently denied any links to the violence, affirming their commitment to peaceful opposition.

The Brotherhood was designated a terrorist group in December 2013 and all its activities were banned.