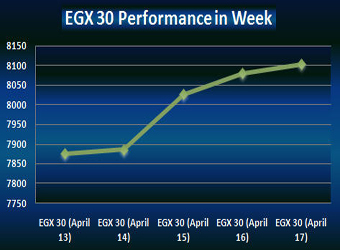 On Tuesday, former army chief Abdel-Fattah El-Sisi submitted 200,000 recommendation forms to the Presidential Elections Commission to become the first presidential runner to complete all the required paperwork for electoral eligibility.

Back to the performance of the Egyptian Exchange’s indices throughout last week trading sessions, the EGX30 surged by 2.6% in a week, registering an increase of 204.21 points, ending Thursday’s transactions at 8103.67 points compared to 7899.46 points at the end of a week earlier.

The main gauge index registered its highest point on Thursday closing at 8103.67 points, whereas its lowest point recorded on Sunday at 7875.22 points.

Furthermore, the market capitalization closed at EGP 477.628 billion last Thursday, compared to EGP 469.516 billion at the end of a week earlier.

Telecommunications sector was the most active sector through last week, recording a volume of trades of 376.2 million securities worth EGP 562.6 million.

Travel & Leisure sector reported third, with a volume of trades of 111.1 million securities worth EGP 238.3 million.

Real Estate was on the fourth position, getting a volume of trades of 104.7 million securities worth EGP 585.5 million.

Industrial Goods and Services and Automobiles came fifth, recording a volume of trades of 72.6 million securities worth EGP 138.3 million.

Personal and Household Products sector reported sixth, having a volume of trades of 66 million securities worth EGP 324.2 million.

Construction and Materials was on the seventh position, with a volume of trades of 47.4 million securities worth EGP 186.3 million.

Food and Beverage took the ninth position, with a volume of trades of 13 million securities worth EGP 63.9 million.

At the bottom of the list, Healthcare and Pharmaceuticals sector reported twelfth getting a volume of trades of 4.2 million securities worth EGP 30.3 million.

Local investors led the market activity all through the week with 88.01%, followed by Foreign and Arab investors with 5.28% and  6.71%, respectively, after excluding the deals.

Foreign investors were the most active buyers during the week earning the value of EGP 37.93 million, after excluding the deals.

Arab investors were to sell by value of EGP 75.79 million, after excluding the deals.

Moreover, institutions seized 47.14% of total trading through the week; while individuals attained 52.86% . Institutions were the most active buyers during the week earning the value of EGP 146.83 million, after excluding the deals.

The Egyptian Exchange (EGX) said trading activities will be halted on Sunday, April 20 and Monday, April 21, 2014 for the Easter holidays.

Trading activities will be resumed on Tuesday, April 22, 2014.

The Egyptian Exchange’s upcoming IPO Summit will be held under the patronage of the country’s government next May 6.

This comes as Egypt’s Prime Minister Ibrahim Mehleb approved to sponsor the EGX IPO Summit 2014 after his Excellency’s meeting with the country’s bourse as well as market regulator chiefs Monday afternoon.

Mehleb met with Dr. Mohamed Omran, EGX Chairman, and Dr. Sherif Samy, Chairman of the Egyptian Financial Supervisory Authority (EFSA), discussing mechanisms for boosting the capital market. In addition, the prime minister also tackled methods for  alluring more companies to get listed on the EGX, in which the state’s development and infrastructure projects can benefit from the stock market for finance.

The EGX is organizing its first IPO conference on May 6, 2014.  This conference would be largest gathering of all market parties who are interested in the initial public offerings; including investment banks, law houses, auditors, with potential issuers.

Meanwhile, Amwal Al Ghad is set to be the media sponsor for the EGX IPO Summit 2014.

The event is set to give a better insight about listing on the EGX and its benefits to the growth of the company’s businesses.

BETA Egypt is investing EGP 1bn in its flagship in…