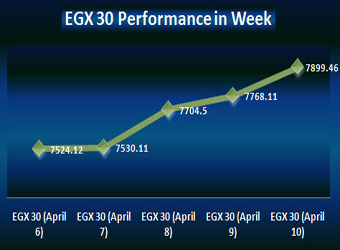 In a week, Egypt’s bourse posted gains totalling 8.2 billion Egyptian pounds. Additionally, the main stock index – EGX30 climbed by 2.5% in a week to close near 7900 points.

The Egyptian Exchange’s indices throughout last week trading sessions, the EGX30 inched up by 2.5% in a week, registering an increase of 198.35 points, ending Thursday’s transactions at 7899.46 points compared to 7701.11 points at the end of a week earlier.

The main gauge index registered its highest point on Thursday closing at 7899.46 points, whereas its lowest point recorded on Sunday at 7524.12 points.

Furthermore, the market capitalization closed at EGP 469.516 billion last Thursday, compared to EGP 461.292 billion at the end of a week earlier.

Telecommunications sector was the most active sector through last week, recording a volume of trades of 517 million securities worth EGP 707 million.

Real Estate reported third, with a volume of trades of 120 million securities worth EGP 614 million.

Personal and Household Products sector was on the fourth position, getting a volume of trades of 75 million securities worth EGP 319 million.

Industrial Goods and Services and Automobiles reported sixth, having a volume of trades of 66 million securities worth EGP 188 million.

Construction and Materials was on the seventh position, with a volume of trades of 53 million securities worth EGP 202 million.

Food and Beverage reported eighth, attaining a volume of trades of 15 million securities worth EGP 73 million.

Basic Resources took the ninth position, with a volume of trades of 12 million securities worth EGP 146 million.

At the bottom of the list, Chemicals reported twelfth getting a volume of trades of 3.4 million securities worth EGP 41 million.

Local investors led the market activity all through the week with 86.98%, followed by Foreign and Arab investors with 8.07% and  4.96%, respectively, after excluding the deals.

Foreign investors were the most active buyers during the week earning the value of EGP 9.03 million, after excluding the deals.

Arab investors were to buy by value of EGP 6.32 million, after excluding the deals.

Moreover, institutions seized 50.88% of total trading through the week; while individuals attained 49.12% . Institutions were the most active buyers during the week earning the value of EGP 168.98 million, after excluding the deals.

The amendment allows respective minister to regulate brokerage commission fees and maximum rates of other services provided in the Egyptian Exchange.

The new decree estimates securities listing fees at 2 per 1000 of any capital, with maximum rate of EGP 500.000 annually.

Egypt’s bourse management is holding today an emergency meeting with heads of brokerage firms and funds, to review reasons behind the recent massive decline in equities.

Dr. Mohamed Omran, Chairman of the Egyptian Exchange (EGX) said he will hold an emergency meeting with managers of brokerage firms and funds operating in the local exchange, both governmental and private, to look into the market conditions and reasons behind the recent steep decline in equities.

The top official invited fund managers to discuss reasons for the selling tendency of some funds over the recent period that drove stocks and indexes lower.

The size of the 42 investment funds operating in EGX amounts to nearly EGP 7 billion.

There is no clear justification for the drop in equities, as profit taking is seen as normal following the record leaps recorded by stocks in the last days, according to Omran.

Omran also indicated that the financial performance of listed companies is solid, adding that he addressed more than 50 companies that slid on the bourse asking them to show their financial positions and P/E ratios to investors in order to help them take the right decisions.

The bourse fell more than 10% since Thursday’s session and market capitalization lost more than EGP 40 billion.

Egypt is working on reinstating its position in MSCI Emerging Market Index by virtue of the disappearance of several reasons for which MSCI had said it might exclude Egypt from the index.

During a meeting with funds, brokerage firms managers on Monday, Dr. Mohamed Omran, Chairman of the Egyptian Exchange (EGX) confirmed that he continues to correspond with MSCI in a bid to convince it not to remove Egypt from MSCI Emerging Market Index, especially after the disappearance of several reasons for which MSCI had said it might exclude Egypt from the index.

In mid-2013, MSCI had said it began consultations with investors on the possible removal of Egypt from the MSCI Emerging Markets Index.

MSCI, an international provider of investment decisions, said in a statement that it “may be forced’’ to exclude Egypt from the emerging markets index due to recent shortage of Egypt’s
foreign currency reserves.
“The recent shortage of foreign currency on the domestic foreign exchange market is of great concern to international institutional investors,” MSCI said in its review of the annual market classification markets in indexes.

Meanwhile, Omran said the decision of the Central Bank of Egypt (CBE) to cover foreign investors’ backlog will bolster Egypt’s position within the MSCI Emerging Markets Index, as this was the main reason behind MSCI’s move.