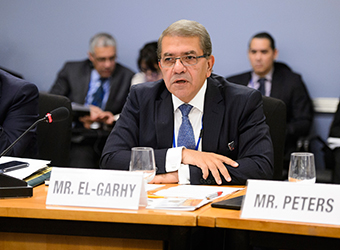 Egypt will issue between $2 billion and $4 billion in dollar-denominated eurobonds in the first quarter of 2018, the country’s Finance Minister Amr el-Garhy told state news agency MENA on Tuesday.

Earlier this year, Egypt sold $7 billion in five-, 10- and 30-year bonds, returning to international markets for the first time since the ouster of president Hosni Mubarak in 2011.

Garhy said it does not plan any such sales in the rest of 2017.

Egypt has been negotiating billions of dollars in aid from various lenders to help revive an economy hit by political upheaval, and to ease a dollar shortage that has crippled imports and hampered its recovery.

The country’s foreign reserves jumped to $36.04 billion at the end of July, the central bank said on Tuesday, their highest level since the 2011 uprising drained the country of foreign currency.

Trump ready to go to war to destroy North Korea: US senator