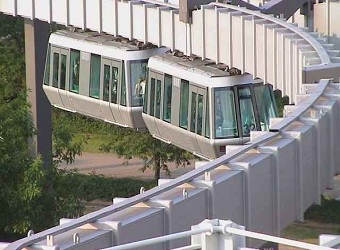 An Egyptian-Canadian consortium has been chosen to carry out Egypt’s suspension railway, a form of elevated monorail, at estimated cost of US$1.5 billion, the country’s housing minister announced Saturday.

Minister Mostafa Madbouly said the suspension train would link between the Egyptian capital of Cairo and Giza govenorate crossing 6th of October and Sheikh Zayed cities.

The project will be financed through a loan that Egypt’s state-run New Urban Communities Authority (NUCA) will pay it back over 14 years, Madbouly added.

Egypt is set to start works on the monorail project in January 2016 over 30 months until mid 2018.

During his meeting with Hany Azer – Egyptian Cabinet Advisor on Transportation and Tunnels, Madbouli clarified that Egypt had approved the technical and financial bid of the Egyptian-Canadian consortium.

Bombardier Inc. is a Canadian multinational aerospace and transportation company, founded on January 29, 1942, and carried out similar projects in 18 states; US, Spain, Germany, Canada, Italy, Portugal, and Saudi Arabia.

Furthermore, Madbouli added that monorail project would include 17 stations; 12 in first phase and 5 more in the second phase that would connect Cairo with 6th of October and Sheikh Zayed cities through Rod El Farag axis.

The project will link Cairo and Giza with 6th of October and Sheikh Zayed cities over approximately 52 km; 27 km in phase one and 25 km in phase two, minister noted.

Moreover, the minister pointed out that the first phase would start from Cairo-Alex desert road passing through two stations in Sheikh Zayed, then Juhayna station, Wahat road, and Egyptian Media Production City(EMPC), till the beginning of Cairo-Wahat desret road while the second phase would end in Alwaraq district.