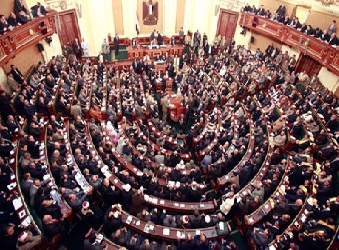 The Parliament’s Legislative Affairs Committee on Tuesday approved the proposal of MP Tharwat Bakhit to amend some provisions of Law No. 162 of 1958 concerning the implementation of a state of emergency, commonly called the Emergency Law.

The head of the committee, Bahaa Abo Shaqa, said in statements to reporters that the declaration of a state of emergency is necessary at present because Egypt is in a state of war.

He added that the reason for the committee’s approval to amend the emergency law is to avoid any suspicion of unconstitutionality in the law.

Article 3 BIS: “Once a state of emergency is declared, without abidance by provisions of other laws, judicial officers may arrest any person who shows indications that he committed a felony or misdemeanor, inspecting his residence, and all places where any dangerous or explosive materials, weapons or ammunition are suspected to be hidden or possessed, or any proceeds of crime, or any instrument to commit it. After obtaining permission from the Public Prosecution, he may be detained for a period not exceeding seven days to complete the collection of inferences.”

Article 3 BIS A: “At the request of the Public Prosecutor’s Office, the emergency state security summary courts may detain a person who shows indications of his danger to public security for a renewable period of one month.”

Churches in Egypt’s Minya will not celebrate Easter