Facebook’s Timeline: A catalog of nothing 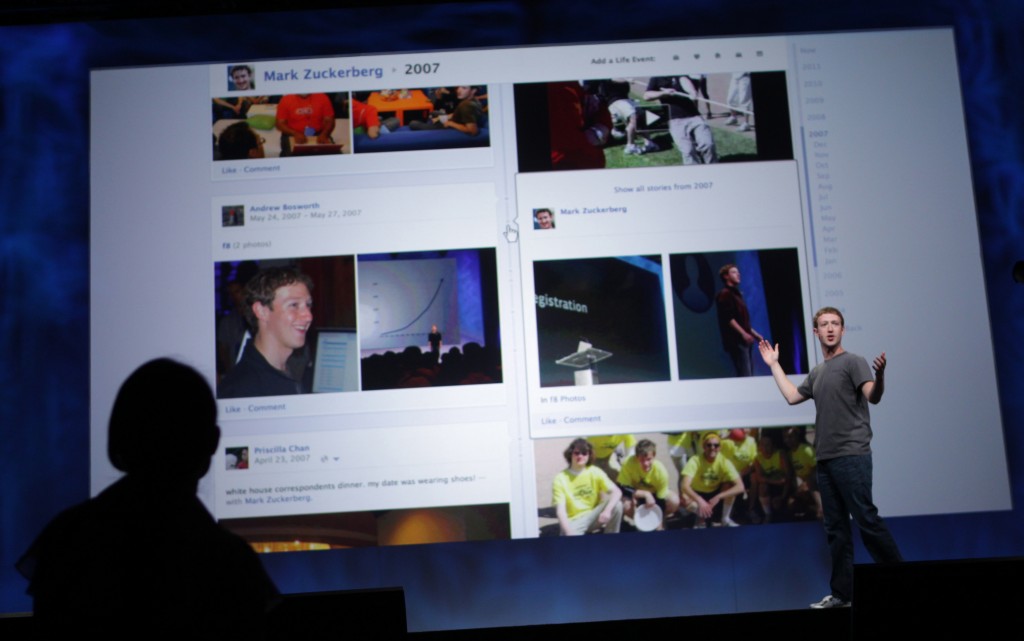 We have seen the past, and it doesn’t work.

Over the past few weeks, Facebook has been rolling out Timeline, its effort to remake its members’ profile pages into scrapbooks that, like nearly everything published on the social web, is told in a reverse chronology. While redesigns always inspire grumbling, the discontent seems particularly strong this time — 70 percent of users surveyed say they just don’t like it, and Facebook’s own blog page announcing Timeline is filled with complaints in the comments.

At first glance, Timeline looks interesting — a retrospective of an online life. But soon enough, there’s plenty not to like. And the biggest problem isn’t that Facebook scrapped the elegant sparseness of the old profile page for a cluttered interface, or that many users will — yet again — need to reset their privacy settings, or even that, once you switch to Timeline, you can never go back to the old page.

No, the biggest problem with Timeline is that it feels like a mean prank Facebook is playing on its users. It confronts them with the unpleasant reality that the sum total of lives preserved by social media is not just mundane but inauthentic, devoid of what gives meaning to the very thing it’s meant to catalog: life.

The press billed Timeline as a kind of scrapbook. But it actually couldn’t be further from one. A scrapbook preserves symbols of moments with deep emotional value. Facebook is an accidental diary of our procrastinations — the games, political rants, lolcats and memes that distract us in the moment but lose meaning even after a few days. If a scrapbook holds the memories of our lives, Facebook preserves the background noise. Timeline makes this all too painfully clear.

Facebook, however, has big plans for Timeline, which is why it’s not letting anyone escape from Timeline’s clutches. Timeline is the front-end user interface for Social Graph, Facebook’s grand plan to create a social platform for the Web itself. Users will share and discover video, music and other content on any number of websites and mobile apps, and their Timelines will act as a central clearinghouse for all of it.

Facebook knows the social web is fragmenting. And it wants to be the glue that holds it all together. So it’s offering dozens of Timeline apps that will share with your friends (and automatically preserve in Timeline) even more trivial minutiae: what songs you heard, what food you ate, what news stories you clicked on, what products you bought or coveted, etc.

This is great news for sites like Foodspotting, Pinterest, Payvment and even dinosaurs like MySpace and Yahoo. All have integrated a third-party app into Timeline and enjoyed a boost in traffic. It’s also great news for Facebook advertisers, who can pay Facebook to prominently feature in news feeds any posts mentioning their brands or products.

The genius of Timeline is that it lets Facebook monetize word of mouth. But it comes at the cost of turning our conversations into commercials. Rather than designing Timeline to better reflect the more meaningful moments of our lives, Facebook is making it a chronology of consumption.

And that is why I suspect no one on their deathbed will use Timeline to remember the good times. The more social Facebook tries to be, the less intimate our interactions on it become. The moments we remember the most are the ones with the greatest intimacy — in our families, our work and our friendships, or even in caring for strangers.

There’s no reason why social media can’t allow for an online interaction that has the intimacy of, say, a dinner party with friends. But Facebook isn’t moving toward that useful goal — it’s moving in the opposite direction, turning our lives into opportunities for product placement and our wishes and desires into ads.

Timeline clearly isn’t working for the majority of Facebook users, although in the end it may not matter. Many will grow inured to it in time, as they have with all of the other controversial changes the company has introduced over the years.

And even now the broad dissatisfaction doesn’t matter to Facebook, its partners and its advertisers, which are the true beneficiaries of Timeline. Forget all of Mark Zuckerberg’s high-minded rhetoric about social missions and the Hacker Way, Facebook’s true mission is to train its users to consume conspicuously and, in doing so, turn friendships into marketing venues.

In a few weeks, Facebook will begin to roll out Timeline for brand pages. Already some politicians have set up Timelines, notably Newt Gingrich and Nicolas Sarkozy. Both of those men opted to omit any mention of their previous marriages. And soon enough, we may all be selectively editing our own Timelines, grooming an online persona that’s more public relations than authentic self.

And why not? In the online world Facebook is creating, it’s getting harder and harder to tell the difference between people and brands.

The Red Sea: 6 million to establish a set of dirt roads