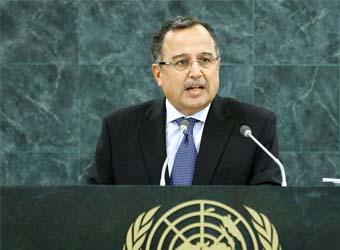 Egyptian Foreign Minister Nabil Fahmy pressed his Guinean and Mauritanean counterparts on Saturday to push for Egypt’s admittance back into the African Union.

On the margins of this weekend’s Al-Quds Committee conference in Morocco, Fahmy met with the two African leaders, Mohamed Fofana of Guinea and Ahmed Teguedi of Mauritania, and stressed the need for a reassessment of Egypt’s current AU suspension, which came after the ouster of Egypt’s first freely-elected president Mohamed Morsi by the military on 3 July amid mass protests against his troubled one-year rule.

According to Al-Ahram’s Arabic news website, Fofana said that he will raise the Egyptian issue in the coming African Peace and Security Council which Guinea is scheduled to host soon.

Meanwhile, Mauritania’s FM also promised that he will follow up on Egypt’s request and lobby on its behalf.

The decision to suspend Egypt, according to Djibouti Prime Minister Dileita Mohamed Dileita, was an automatic measure in accordance with an AU mandate in 2000, a time when Africa witnessed several military coups.

“If we look more closely at the 5 July AU statement suspending Egypt, we find that it does not speak of a coup, but of unconstitutional change,” Dileita told Ahram Online earlier in August, when he spoke of the possibility of the decision being lifted.