NBE and Banque Misr ranked 9th and 10th, respectively as the safest banks in Africa. 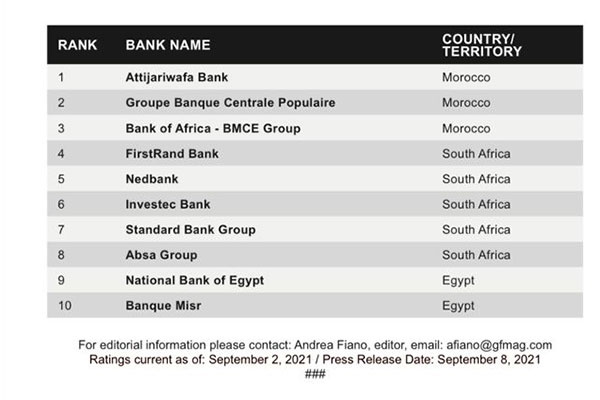 South Africa has had the lion’s share in the magazine’s list, with five of its banks taking the fourth through the eighth spots.

Global Finance’s list of Safest Banks across Africa is part of its annual rankings of the World’s Safest Banks.

The full list is expected to be released in the November print and digital editions of the magazine, and online on GFMag.com.

“The past year demonstrates the resilience of the banking sector, which stood as a bulwark against collapse during the coronavirus pandemic, supplying critical emergency funding as well as, in many cases, emergency equipment and supplies,” Joseph Giarraputo, publisher and editorial director of Global Finance, said.

Giarraputo added that the safest banks are paragons of stability, and continue to provide the support for governments and communities necessary to recover from the COVID-19 pandemic’s economic shocks.

Banks were chosen through an evaluation of long-term foreign currency ratings — from Moody’s, Standard & Poor’s, and Fitch — of the 500 largest banks worldwide.

The list comprises central bank governors who earned “A” or “A-” grades as part of the Global Finance’s Central Banker Report Cards 2021.

E-Finance announces intention to IPO on Egypt bourse in Q4