Global Finance Magazine has named Egyptian Central Bank Governor Tarek Amer as one of the Top 20 Central Banks’ Governors in the World for 2022.

In its Central Banker Report Cards 2022, the magazine has awarded the top 20 central bank governors “A” or “A-” grades.

The magazine’s full report and grade list will appear in its October print and digital editions as well as online at GFMag.com.

The Central Banker Report Cards has been published annually by Global Finance since 1994, grading the central bank governors of 96 key countries, territories, and districts including the European Union (EU), the Eastern Caribbean Central Bank, the Bank of Central African States, and the Central Bank of West African States.

Grades are based on an “A” to “F” scale for success in areas, including inflation control, economic growth goals, currency stability, and interest rate management.

An “A” grade represents an excellent performance while an “F” stands for outright failure.

“As fears of a global recession take hold around the world, the spotlight is on central bankers to enact policies that help avert this scenario,” said Global Finance founder and editorial director Joseph Giarraputo in a statement.

“Global Finance’s annual Central Banker Report Cards analyze and rate the financial policy leaders that are making the best decision and those that need to improve.” 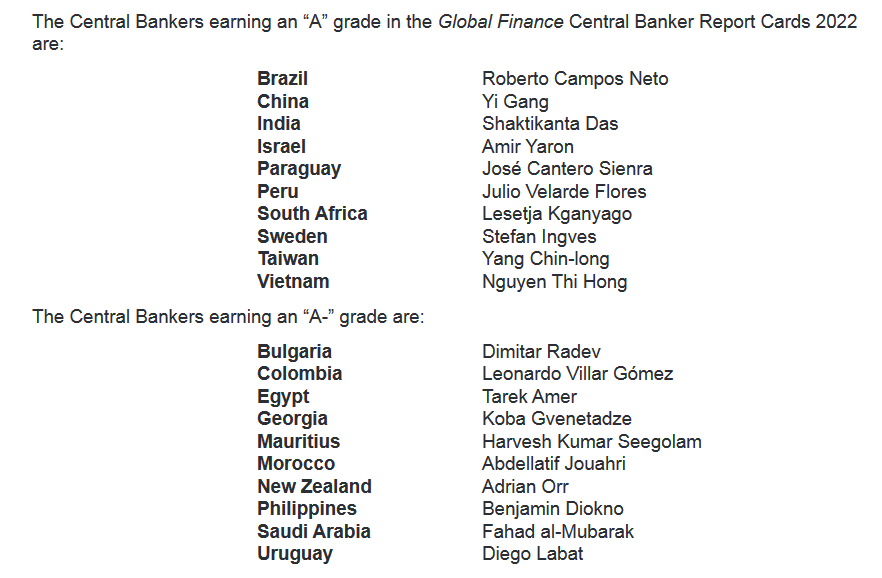 Egypt aims to raise $6 billion by June from share…