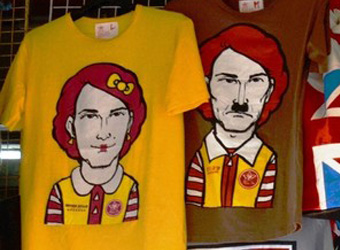 In the Thai capital’s latest outbreak of Nazi chic, pandas, Teletubbies and Ronald have metamorphosed into cutesy alter egos of the Führer, who seems to exert a childlike fascination over some young Thais.

With any luck you can spot trendy young souls strutting around in T-shirts bearing cartoonish images of the Nazi dictator.

In a particularly popular design, Hitler is transformed into a cartoonish Ronald McDonald, the fast-food chain’s clown mascot, sporting a bouffant cherry-red hairdo and a stern look.

On another T-shirt the Führer is shown in a lovely panda costume with a Nazi armband. On yet another he appears as a pink Teletubby with doe eyes, jug ears and a pink swastika for an antenna. He pouts petulantly like a spoiled brat while flashing the Nazi salute.

Shirts cost from 200 baht to 370 baht (US$7-12) apiece, and some come in matching outfits for couples. Adolf McDonald’s partner is a transvestite with fuchsia hair, lipstick, long lashes and a timid Mona Lisa smile. Panda Adolf’s manlier doppelganger sports a brown stormtrooper uniform.

“Some foreigners get upset [when they see my T-shirts on sale] — they come to my shop and complain,” acknowledges the owner of Seven Star, a small clothing shop at Terminal 21, a new designer mall in central Bangkok on Sukhumvit Road which is a popular tourist haunt.

He’s a 30-something fellow who identifies himself by his nickname “Hut”, and is a graduate of a local university’s arts program. Hut does brisk business selling his T-shirts. Seven Star’s most popular items, Hut notes, are his  McHitler designs, which he sells alongside his caricatures of Michael Jackson, Che Guevara and Kim Jong-Il